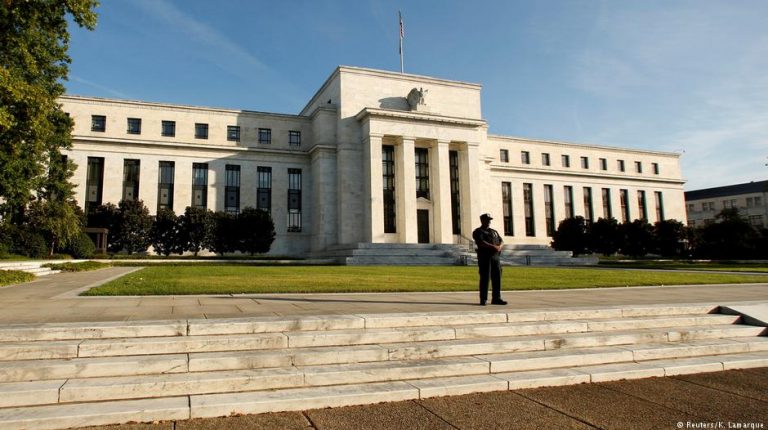 The US Federal Reserve is starting a two-day review of its monetary policy. Markets expect the third interest rate increase since December 2016 at its conclusion.Very low unemployment, gains in factory output and other economic data pointing to a recovery in the US economy have led markets to believe that the Fed will lift interest rates for the third time in six months.

Futures markets on Tuesday indicated a near 100 percent probability of another rate hike at the conclusion of the Federal Open Market Committee (FOMC) on Wednesday.

At its most recent meeting in May, the Fed left its rates unchanged, but suggested another hike was imminent.

How robust is the recovery?

In the United States, factory output figures have been rising for nine straight months. The stock market is surging on stronger corporate profits, brightening economic forecasts and hopes that President Donald Trump and the Republican Congress will cut taxes and regulations.

The US unemployment rate is at 4.3 percent, a 16-year low. In the past, Janet Yellen, the Fed’s chairwoman, had repeatedly said a recovery of the job market was a condition for higher interest rates.

But there are doubts. Last year, the economy only grew by a meager 1.6 percent, followed by an even lower 1.2 percent annual pace from January through March.

Job growth has also been slowing recently. The economy added just 362,000 jobs from March through May – an average of 121,000 a month – the weakest three months of hiring since 2012.

And America’s worker productivity growth is dismal, averaging just 1.2 percent a year since 2007 – half the annual gains registered from 2000 to 2007. Only when workers can generate more value per hour on the job do they generally accelerate economic growth and enjoy higher incomes.

Given these persistent signs of weakness in the world’s largest economy, a further interest rate hike risks to dampen economic recovery.

The Fed could afford to wait. Inflation remains at 1.5 percent, stubbornly below the Fed’s 2 percent target. In the latest data released Tuesday, the Producer Price Index, which measures input costs for sellers, was flat in May, a result of sharp declines in the costs for food and fuel.

Members of the Fed’s Open Market Committee said last month that economic weakness was likely only “transitory,” and a rate hike was likely to be needed “soon,” although they said they would wait to see evidence the economic recovery had resumed before taking the next step.

But the weak recent economic data have left the course of interest rate policy for the rest of the year in doubt. The FOMC’s forecasts projected a total of three rate increases this year, but that could change in the new quarterly projections released on Wednesday.

Federal Reserve chair Janet Yellen will hold her quarterly press conference after the meeting and her comments will be scrutinized for any hints on whether a third rate hike is likely this year, and whether it would happen in September or be pushed back to December.

Joseph Gagnon of the Peterson Institute for International Economics said the economy was strong enough to justify this week’s expected rate hike, but the Fed might hold off from making another move.

“The more dovish thing that might hold them back is that core inflation is not really continuing to rise and wage pressures are pretty weak,” Gagnon said.

Observers also hope for details on the Fed’s plan to shrink the $4.5 trillion of assets it has amassed since 2008 to nurse the economic recovery after the financial crisis.

The Bank of Japan and the Bank of England also meet this week, although no major policy changes are expected. The European Central Bank (ECB), for its part, is not even thinking about raising interest rates yet.