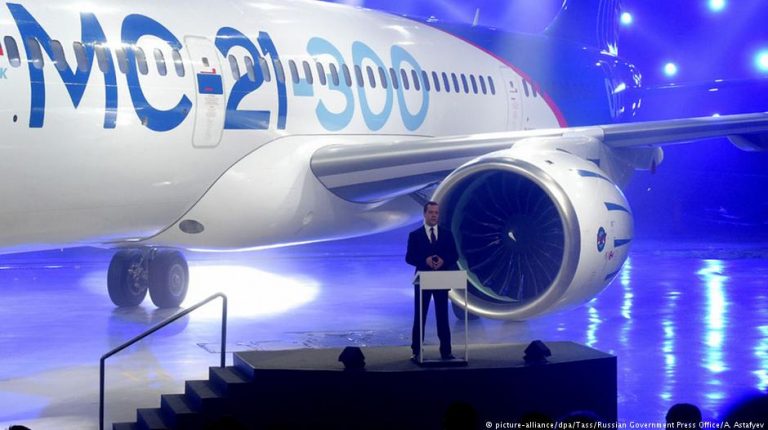 A new Russian medium-haul passenger jet has successfully completed a first test flight. But whether the MC-21 will really be able to compete with similar planes from Boeing and Airbus is not yet clear.Russian pilots completed a successful test flight of the country’s new MC-21 medium-haul passenger jet on the weekend amid hopes the nation could revive its troubled civil aviation industry and challenge giants Boeing and Airbus.

“There were no negative points identified that would prevent the continuation of tests,” Kononenko was quoted as saying by the Irkut Corporation plane manufacturer.

The MC-21, also known as MS-21 in the West, can carry a maximum of 211 passengers and is designed for the mass-market travel industry to compete with Boeing’s 737 and Airbus’ A320 as Russia intends to reduce its dependence on Western technology amid ongoing sanctions over its perceived role in the Ukraine conflict.

The makers of the MC-21 promised a “new level of comfort” for passengers thanks to the largest fuselage in the plane’s class and extra-large windows.

Irkut said it had already signed contracts with a number of carriers including Russian flagship airline Aeroflot and the Kyrgyzstan Air Company.

The test flight came six years after Russia’s short-haul Sukhoi Superjet aircraft went into service. It has since suffered serious technical issues that have forced the plane’s grounding.

Airbus delivers 718 aircraft to its customers by end-2017