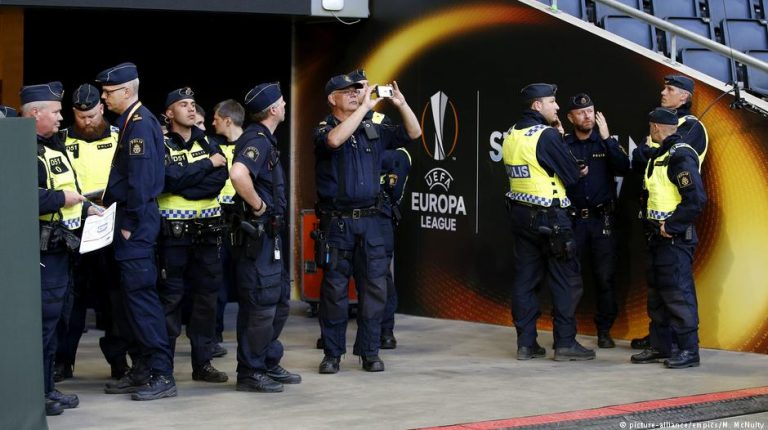 Organizers have urged people planning to attend the Europa League final to get to the stadium early, due to stepped up security checks. The game is to go ahead despite Monday’s deadly concert attack in Manchester.Michael Englund, the head of security of the organizer of Wednesday night’s final, Stockholm Live, told Swedish broadcaster SVT that fans should be prepared to turn up to “two, three hours before kickoff.” He also urged people without a ticket for the match between Ajax and Manchester United to “avoid turning up” at the Friends Arena in Solna, just outside of the Swedish capital.

Fans will have to make their way through three separate security checks before entering the arena, which has a seating capacity of around 50,000.

Supporters have also been advised to bring along an ID card or passport so that their identity could be checked against details provided with their ticket application.

The halftime show that had been planned for the final has been cancelled in light of the terrorist attack at Manchester Arena on Monday, in which 22 people died and around 50 others were injured.

Players from both teams are expected to wear black armbands and a moment of silence is to be held prior to the opening kickoff.

Football’s European governing body, UEFA, has said it is working closely with all of the relevant authorities and that “there is currently no specific intelligence which might suggest that any of the UEFA Europa League final activities in Stockholm may be the target of attacks.”

UEFA granted a request by Manchester United on Tuesday that they be allowed to forego their normally compulsory pregame press conference, however the club have express their sympathies with the victims and their families through social media.

Ajax have also expressed their sympathies and solidarity with the victims, but coach Peter Bosz did attend his prematch press conference in Stockholm on Tuesday. He told reporters that the deadly attack had taken the “glow” off of the final, adding that because of events in Manchester, we’re all affected, particularly as we’re playing against Manchester.”