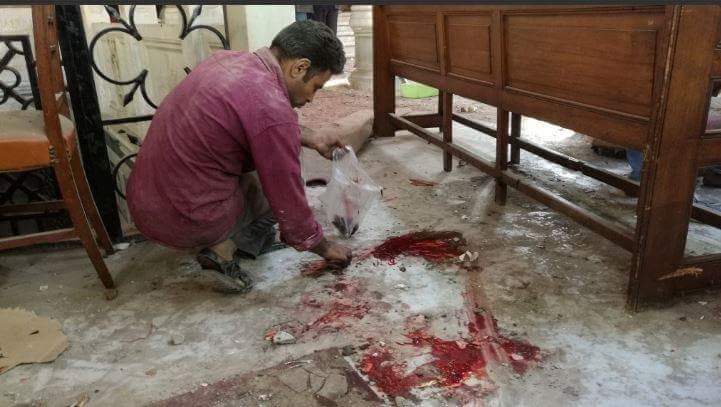 A bomb exploded on Sunday morning, between 9.30 am and 10.00 am near Mar Girgis Church in Tanta, Al-Gharbeya, leaving 13 killed and 42 injured so far, local media reported.

01:38 President Abdel Fattah Al-Sisi condemned the attack. In an official statement, Al-Sisi said the attack targeting Egyptian Christians will not destroy the will of the Egyptian people in facing ‘evil powers.’

12:35 Prime Minister Sherif Ismail heads a delegation of ministers of solidarity, health, immigration, and administrative development to Gharbeya to follow up on church explosion: Ministers’ Cabinet.

11:40 Egyptian Grand Imam of Al-Azhar Ahmed El-Tayeb forms delegation of religious officials to visit Tanta church in solidarity with Egyptian Christians. In a condemning statement, Al-Azhar expressed condolences to the families of the victims and said the “terrorist attack” aims at disturbing the unity of the Egyptian people.

11:40 ‘We condemn the terrorist attack on Mar Girgis Church, vow that our state will destroy terrorism from its roots,’ says PM Sherif Ismail

11:18 Foreign Ministry reacts to incident by launching a social media campaign titled “United on Palm Sunday”, as ministry spokesperson calls it “an obnoxious but failed attempt against all Egyptians.”

10:56 Ministry of Interior issues statement saying the Gharbeya Security Directorate received reports of an explosion occurring on Sunday morning at Mar Girgis Church in Tanta. Security forces cordoned the place and were accompanied by bomb squads.

In Video: Inside Margirgis Church after explosion

3-month state of emergency declared by presidency, approved by cabinet