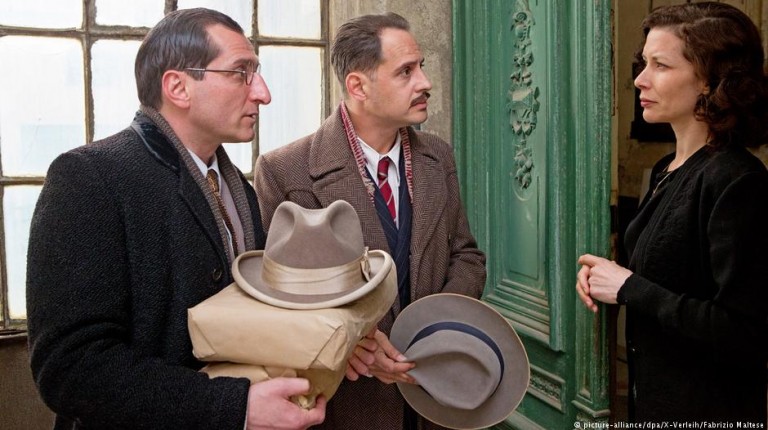 Some 4,000 Jews remained in Germany after the Holocaust. Their motivations have rarely been explored. The movie “Bye Bye Germany,” starring Moritz Bleibtreu, chose to depict their paradoxical situation through humor.”Hitler is dead, but we are alive!” declares David Bermann to motivate his new business partners at the beginning of the film “Bye Bye Germany,” directed by Sam Garbarski.

Before the war, Bermann, a fictional character played by actor Moritz Bleibtreu, used to run a successful linens company with his brothers in Frankfurt. Now that the war is over, he wants to pick up business again – but he is the only survivor in the family.

As he can’t obtain a license from the Allies, he sets off to find partners among the surviving Jews stranded at the Frankfurt camp for displaced persons.

‘All original from Paris, ladies!’

Bermann still has enough goods available in his old stockroom. Since he cannot open a new store for his business, he goes directly to the clients instead. With his partners, he knocks from door to door, trying to sell tablecloths, underwear and towels to housewives: “It’s all original from Paris, ladies!”

The salesmen do not hesitate to twist the truth, charming their potential clients with a few sales tricks or a fake survivor’s story every now and then. The Jewish salesmen don’t feel guilty about duping them – after all, Germans owe them big time, plus they’re getting great goods for their money.

The Jews in post-Holocaust Germany

“Bye Bye Germany” is a comedy about Jews in post-war Germany. Laughing about the Holocaust, Hitler and the Nazis has always been a delicate endeavor.

In this case, film director Sam Garbarski has managed to combine humor and tragedy throughout the movie. The work was inspired by two semi-autobiographic novels by Michel Bergmann, who also co-wrote the script with the filmmaker.

Bergmann had two reasons to want to tell this story: “I wanted to create a tribute to my uncle David, who was a great joke teller. The other reason is that, until then, there weren’t any novels or films about the Jewish Holocaust survivors who stayed in Germany after the war,” said Bergmann. “It’s like a blank spot in Germany’s collective memory,” he added.

Based on true characters

As soon as he read the novel, Garbarski knew he wanted to make a movie out of Bergmann’s “The Traveling Salesmen.” “I couldn’t stop reading the book – I read it in a single night, and that has only happened a couple of times in my life. I had the feeling I was swimming in one of my mother’s pots of home-made noodle soup,” said the director to illustrate how he “immediately felt at home” with the characters and the universe of the book.

The plot of the novel “The Traveling Salesmen,” which tells the story of Jewish linen salesmen, was combined with elements of another book by Bergmann, “Machloikes.” The latter is about a Jew whose extraordinary joke-telling skills allow him to survive a concentration camp. Not only that, he is so good that he is asked to teach his art to a humorless Adolf Hitler.

In the film, David Bermann (Bleibtreu) therefore convincingly embodies a talented humorist. However, the Allies suspect him of having collaborated with the Nazis in the concentration camp.

Interrogated by the Allies

Between sale pitches to German housewives, Bermann keeps disappearing from his group of colleagues, interrogated by the – very attractive – female special agent Sara Simon (Antje Traue). The officer wants to find out what Bermann was up to during the war. How did he obtain special treatment from the Nazis at the concentration camp?

Is there a historical basis for the figure of Sara Simon, a special US agent, tasked after World War II with interrogating Jews who were suspected of collaborating with the Nazis? Sam Garbarski confirms: “They actually existed. They were selected on the basis of their specific skills and background: Jewish German lawyers were the ideal profile.”

“Bye Bye Germany” portrays the period right after Germany’s collapse, focusing on the role of Jewish humor, which has become a symbol of survival. “Jewish humor is not necessarily that funny; it is rather philosophical. It is like survival medicine,” said Garbarski.

In David Bermann’s case, the fact that he could tell jokes saved his life. His story depicts his difficult position as the entertainer of his family’s executioners, explains the filmmaker.

Some will criticize the movie for focusing a little too much on the funny, humorous elements, or find that the sets and the costumes are a little too polished for that gloomy period, leaving the tragic aspects of history on a superficial level.

“Bye Bye Germany” definitely does not reach the depth and emotion of other works which also featured a combination of comedy and tragedy through Jewish survival humor, such as “Jakob the Liar” or “Life Is Beautiful.”

Still, this new comedy offers an entertaining portrayal of a little-known chapter of German-Jewish post-war history.

“Bye Bye Germany” is released in German theaters on April 6.