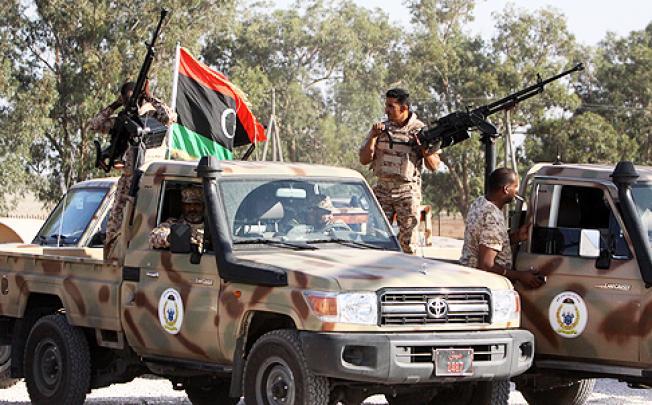 Attendees of the Cairo Quartet Meeting on Libya confirmed that there is no military solution for the conflict and that it can only be settled through dialogue and through the commitment of all parties to resolve the differences between them, according to an Arab League statement issued on Saturday.

The attendees strongly reaffirmed their rejection for using military force, as well as resorting to any foreign military intervention, in Libya.

The Cairo Quartet Meeting on Libya was held in the Arab League headquarters, in coordination with the African Union (AU) and European Union (EU), to discuss the situation in Libya and ways of strengthening the coordination between factions there, in an effort to support the country in its democratic transition process.

The meeting was hosted by Ahmed Aboul–Gheit, secretary-general of the Arab League; Jakaya Kikwete, the AU high representative for Libya; Federica Mogherini, the high representative of the EU for Foreign Affairs and Security Policy; and Martin Kobler, the United Nations envoy to Libya.

The Arab League, AU, and UN welcomed the participation of the EU in the meeting, stressing the significance of its presence and role to solve the Libyan crisis.

During the meeting, the attendees agreed on rejecting any military interference in Libya, suggesting the importance of a coherent and professional Libyan army to be working under a unified command structure, in accordance with the text of the Libyan Al-Sokhairat agreement.

The four groups reaffirmed their commitment to supporting the sovereignty and independence of Libya as well as to the territorial integrity and national unity of the country’s institutions. They also confirmed the urgent need for reaching a peace settlement in the country.

The four groups strongly condemned the outbreaks of violence, especially those that occurred in Al-Helal El-Nafty (Crescent Oil) district in Libya, which began on 3 March.

The discussion called on all Libyan factions and parties to preserve Libya’s economic capabilities and oil infrastructure and stressed the need for a unified national oil corporation that would assume full responsibility of all oil facilities in the country.

The aforementioned sides expressed during the meeting their deep concern about the threat terrorism poses on Libya, on its neighbouring countries, and on the region as a whole. They further expressed and confirmed their continuous support of Libya and their unified efforts and initiatives for it.

The meeting also came after an invitation by Aboul-Gheit during the closing of the 147th session of the Arab League Foreign Ministers Council that took place in early March.