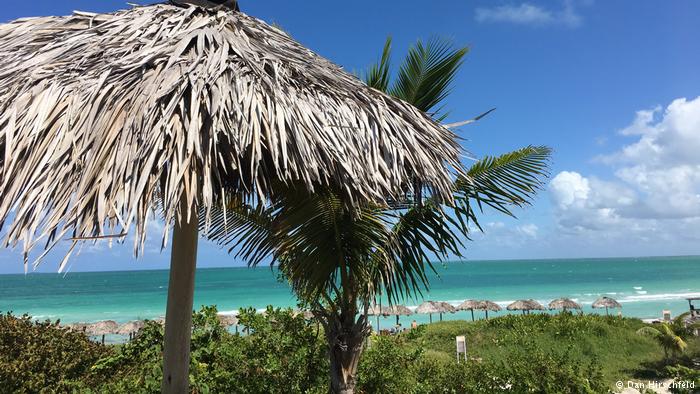 Within a few months more has changed here than in the past few decades. Cuba, the last “socialist paradise” is opening up to the west – and thereby risks losing its own very special flair.Friends laughed when I told them of my plans to spend two weeks in Cuba. More than once I had to listen to remarks like: “Are you looking to experience socialism and shortages?” or “Ah bless, you want to go back in time…” I grew up in the eastern part of Berlin – known in my youth as “Berlin – the capital of East Germany” – so I had already had plenty of first hand experience of “real living socialism”.

And yet, maybe after 25 years of a unified Germany, it was just this aspect which made the trip so appealing. I didn’t want to miss the chance, after the cautious opening of the country, to get to know a Cuba where the influence of the Western world was still limited. A hope which was only partially met, – but more on that later.

On arrival at Varadero airport (flights to this tourist enclave were at least a third cheaper than going to the capital Havana a hundred kilometers away) the first thing I noticed were the women dressed in olive-green uniforms. Some looked fierce, others friendly, but all of them in their uniform tunics were wearing nylon tights with patterns and decorations – as varied as you can imagine. Revolution and individualism therefore wasn’t the contradiction it is said to be in books.

Varadero – three days of beach, a chance to arrive and acclimatize. At which stage I’d had enough of Varadero, with its white sands and luxury hotels for western tourists. What might look like a picture book holiday destination has as much to do with the real Cuba as the “Buena Vista Social Club” have to do with a convent school. In my quest to find an authentic Cuban experience an old man at the airport recommended that I should just head to where music was being played.

Talking of music – that’s one thing that seemed omnipresent on Cuba: on the beach, in derelict house ruins in Old Havana, in cafés or on the street. Cubans love music and dance, especially the Salsa. And music seems to help them live with a degree of ease – more than once did I see a dispute resolved by someone beginning to sing which had a calming effect on everyone.

During the following two weeks I often found myself thinking of the old man at the airport. I followed his advice and rode a bus for two hours to get to Havana. On the Prado, a former grand boulevard, I found a place where music was being played. Here artists spend their weekends selling drawings, paintings and sculptures. In among them was a DJ. A few meters further on a young man with a fabulous voice was belting out a song, while spontaneously dancing with an old lady on the concrete slabs of the central reservation between the road tracks. He told me that he’s a teacher at the dance academy on the Prado, but that he earns a few dollars on the street from tourists to supplement his wage.

“Earning a few dollars more”, for many Cubans it has become a matter of survival. In Havana but also in the more rural areas. From the region around Baracoa in the eastern part of the island (which is still suffering from the aftermath of a hurricane) all the way to Pinar del Rio in the west, where you can apparently get the best cigars in the world. As a non smoker I was merely fascinated by how nimble and dexterous the cigar workers were. The Cuban Peso (CUP), the currency in which wages are paid here, will buy you stamps or a bus ticket, but in most places you can’t pay for your shopping with it. Most shops accept Cuba’s second currency, the “peso-convertible” or CUC. One CUC is equivalent to 25 Cuban pesos or one US dollar. Those who have CUCs can buy pretty much everything. So this currency is much sought after, regardless of the cost.

That’s why throughout the country many Cubans will rent out rooms in their houses. It’s known as “Casa Particular” and has only been permitted for the past couple of years. It’s also a fantastic way to get to know the real Cuba and its people.

In met Pablo, who would one day like to be a tourist guide, because he gives English classes to the couple who are my hosts in Havana. On a walk through the old town center he told me that prices in Cuba had quadrupled in the time from spring to fall in 2016. One tin of locally made cola costs one peso-convertible. A liter of orange juice (and oranges grow everywhere on Cuba) costs 2.40 CUC. The problem is that an average Cuban earns about twenty to thirty CUC. Power, water and gas are highly subsidized and therefore still comparatively cheap but even so, Pablo helped me calculate how it’s nearly impossible to feed a family from normal employment and pay.

It is at this point that I, the tourist from the West, began to understand, why old men on the street kept trying to sell me pictures of Cuban national hero Che Guevara. They can not survive on the pension which is paid in local pesos. I know now why even in simple restaurants in the old town center of Havana you rarely see any Cubans. They can’t afford the ten CUC needed to pay for a meal and drink. I understand that when I didn’t have any local pesos and I paid the bus driver with a CUC instead, he gave me a big happy grin. I had just handed him what he normally earns in a day.

Classic cars! They are as much a part of Cuba as rum and salsa is. They were also one of the reasons I really wanted to come here. Before masses of US tourists over-run Cuba (there are already dozens of flights from the USA to Havana and soon there will be twenty) and obliterate the special flair of the old alleyways in the capital. Owning a classic car is as good as winning the lottery. Oscal proudly opened the bonnet and explained: Japanese engine, German gearbox, and brakes which were produced in Russia. Everything assembled by him personally. More than fifty years of shortages have made Cubans masters of improvisation.

This, of course, applies to all areas of life. Most houses – not just in Old Havana – are in a dreadful state with collapsing roofs and weathered facades. Cubans, who a couple of years ago able to buy their own four walls at favorable conditions, which in turn means that hardly anyone rents accommodation, repair and restore their abodes whenever they can get hold of building materials. They exchange water pipes for bricks. They are extremely proud of their old colonial buildings, whose fragile walls emanate more history than the often faceless new housing developments at the other end of Havana.

Improvising and making something of very little has become a way of life, especially for young Cubans. A few months ago Eduardo, a kind of self-made entrepreneur, created a snack bar by setting up a table, a small fridge, a blender and an old oven on the beach of Guardalavaca in north-eastern Cuba. Eduardo told me the story of a tourist, who suddenly late one afternoon found herself plagued by hunger but unable to find an state-run hotel restaurant that was open. They had all closed. Eduardo was also looking to close up. Instead he decided to pack all the ingredients he had left on to a pizza for her, and while it was cooking he even came up with a name for his culinary creation. The woman was so impressed that she returned with four of her friends the following day.

Young people in particular say they think the tentative opening up of Cuba is not happening fast enough. A complaint I often heard on my travels. The internet is a perfect example: the government began a while back to install WLAN hotspots across Cuba, thereby opening access to the world and ending Cuba’s isolation. Despite access being hard to get hold of (I tried in vain for five hours to buy an access card at one of the official outlets) and internet access at two CUC (a tenth of an average monthly wage) an hour being very expensive it is widely used. Especially in the evenings hundreds of people will gather at the side of a road or sit in the many parks – with laptops or clutching mobile phones – a sure indication that internet access is available at this location. In a dark corner you’ll invariably find the black market traders selling access cards – and similarly to drug dealers – you can expect them to add a hefty mark-up.

Two weeks on, as I get on my plane to fly home, I realized three things:

The isolated socialist Cuba of old, which you can still read about in books, in many places has already vanished.

Change on the small Caribbean island following the death of “el commandante” Fidel Castro and the political thaw with the US is going to be unstoppable.

But most importantly of all I realized that I wanted to go return to Cuba. Sooner rather than later!