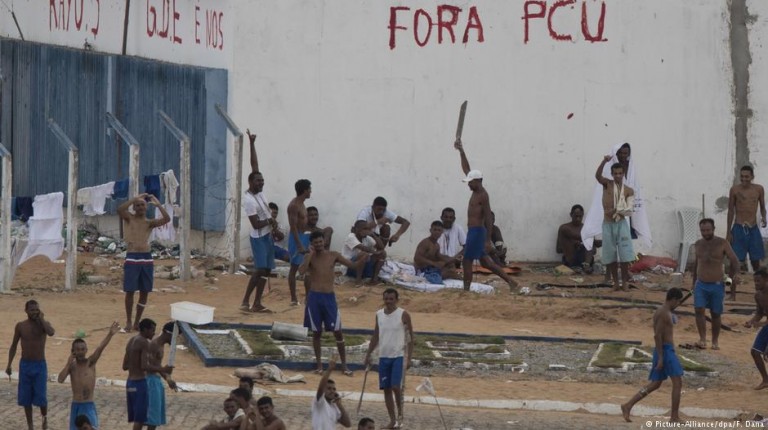 Security forces have managed to separate rival drug gangs at Alacuz prison near Natal. The facility has seen a week of violent rioting that has killed dozens.Security services regained shaky control over the Alacuz prison in northeastern Brazil on Saturday. Using shipping containers, police were finally able to separate rioting rival gangs of prisoners after a week of violence that has killed an untold number of inmates.

The fighting in Alacuz, near the city of Natal, was the latest in a spate of disturbances across Brazil that has seen more than 140 inmates killed in the past year.

Although the police had managed to take control over the situation after a number of soldiers and armored vehicles entered the premises, the general commander of the military police in Rio Grande do Norte state, Colonel Andre Azevedo, warned that they were not out of the woods yet, as many of the inmates still inside were armed.

“Every time the police enter… they take away weapons that they find, but this is not enough to guarantee that tomorrow there won’t be weapons,” he told reporters, adding that the entire system had been broken down inside.

In an effort to quell the violence that has broken out between members of rival drug gangs, police have planned to replace the shipping containers with concrete walls and remove as many inmates from the overcrowded prison as possible. As of Saturday, around 200 had been bussed out of the facility which had housed more than 1,000 men despite being designed to hold 620.

Even before the rioting began last week, Alacuz was known for being dangerous. Built on sand dunes, a number of inmates have managed to tunnel out over the years, and the violence has sometimes spilled over into nearby Natal. Indeed, attacks on public transport and state buildings have increased across the city in recent days.

So far authorities estimated that at least 26 inmates have been killed, though the way the gangs dismember the bodies has made it difficult to determine the real death toll.

Officials in Brazil have been under pressure to reduce the country’s high rate of violent crime, but decreases in funding have led to overcrowding in prisons and worsening conditions.

Maradona in charge: Argentina braces itself