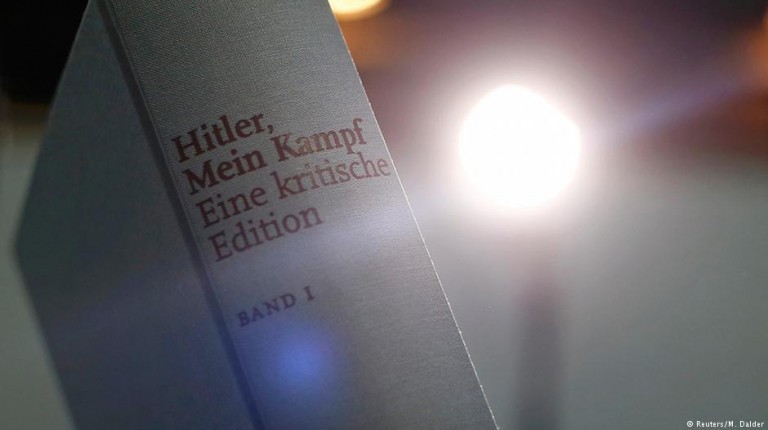 An annotated, critical edition of Hitler’s infamous “Mein Kampf” has been on sale for a year, the two-volume tome becoming a surprise bestseller with 85,000 copies sold. But the book is still attracting controversy.At the end of January, a sixth run of the critical edition of Adolf Hitler’s anti-Semitic “Mein Kampf” will be released. The strong sales have come as a surprise.

“No one could really have expected them,” said Andreas Wirsching, Director of the Munich-based Institute for Contemporary History (IfZ) that produced and published “Hitler, Mein Kampf. A critical edition;” an annotated version of the notorious book accompanied by extensive critical comments.

The research team at the IfZ had wanted to anticipate the uncommented reappearance of the original “Mein Kampf”, which would be freely available on the internet when the copyright expired on December 31, 2015.

Nevertheless, the new publication attracted a lot of skepticism. Shortly before the edition was first released last January, the former president of the Central Council of Jews in Germany, Charlotte Knobloch, warned that the legal distribution of such anti-Semitic hate would open a Pandora’s box.

In April 2016, the two-volume work even made it to number one in “Der Spiegel’s” bestseller list. The extremely bulky tome, with its myriad annotations, was not meant to be a sales hit. Nonetheless, interest in it was enormous, including from outside Germany – for weeks, the international press reported extensively on the publication.

While Wirsching himself has given numerous interviews, IfZ’s team of researchers, under the guidance of the historian Christian Hartmann, took part in more than 70 readings, discussions and symposia at home and abroad. Whether in Moscow, Vienna, Warsaw, Amsterdam or Toronto, there was a relentless demand for critical appraisal of the ambitious research project.

Last November, project leader Hartmann and his team received the “Society Needs Science” Award, which comes with a cash prize of 50,000 euros. The jury explained that IfZ’s critical edition of “Mein Kampf” had closed “a great gap in the research on National Socialism in Germany.” The publication painstakingly analyzes the false statements in Hitler’s work, shows ideological distortions, and clarifies the many historical errors in it.

Critics have since remarked that the book consists more of notes than of text. The detailed footnotes were designed by the IfZ historians to become part of the story and to allow interested novice readers to more easily understand the text.

The publication’s success has given the Munich institute worldwide recognition. The literature supplement of England’s “The Times” newspaper stated: “The scope and price of the new issue of ‘Mein Kampf’ will probably ensure that it does not become mandatory in racist and extremely nationalist circles, but the first print of 4000 copies sold out within a few days.”

The publisher is relieved that Charlotte Knobloch’s fears have not, as yet, been realized. “There were no criminal complaints against IfZ’s critical edition, no propaganda campaigns by the far right, and no disruptive attempts by right-wing publishing houses to put “Mein Kampf” on the market immediately after the copyright expired,” states an IfZ press release.

In the future, the critically annotated edition of “Mein Kampf” will be used in history classes in German schools. The Bavarian State Center for Civic Education is working on a handbook that will detail how extracts from the edition can be used in history lessons.

But before this can happen, the state parliament will be informed, says a spokesman for the Ministry of Education in Munich. “It is about dealing sensitively with a difficult and historically disturbing resource.”

IfZ Director Wirsching reacts cautiously to this idea. “I personally have a somewhat conflicted response to this question,” he says. “It would be absurd to fall back on the discussion of the 1950s and say, Hitler was it. I warn against placing Hitler in the centre of public debate, especially in terms of history lessons.”

Culture 2015: People who left their mark