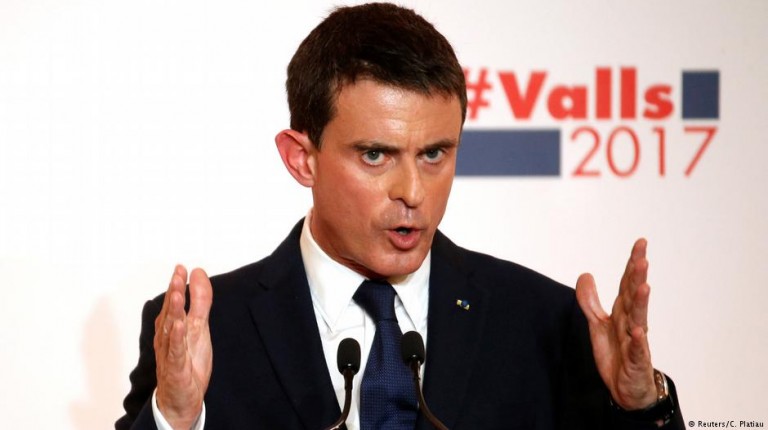 Former French PM Manuel Valls has promised to avoid deep public spending cuts, in a pitch to voters ahead of France’s presidential election. Valls faces six other candidates for the Socialist Party nomination.Manuel Valls laid out his plans for the presidency on Tuesday to supporters of the ruling Socialist Party (PS), warning that the current favorite to win, conservative Francois Fillon, would carry out a mass sweep of France’s much-loved public services.

In a speech aimed at traditional left-wing voters, Valls promised to avoid draconian public spending cuts if he wins the Élysée Palace, adding that the French welfare system would be overhauled to provide substantial handouts to many jobless people.

Valls resigned last month as prime minister to run for the Socialist nomination, after President Francois Hollande confirmed he would not seek a second term in office following a turbulent four years in power.

Hollande’s tenure was also marred by severe infighting within the Socialist Party, between the center-left leadership and die-hard leftists. He’s also taken the blame for a weak economy and, until recently, his failure to tackle unemployment.

Current opinion polls suggest that Valls is likely to beat the other six Socialist candidates in a two-round primary vote this month for the party’s ticket. The poll will take place on January 22 and 29.

But analysts predict that whoever is named the Socialist candidate will struggle to make it past the first of the two-round presidential election in April and May.

Instead, Fillon and far-right National Front leader Marine Le Pen are seen battling it out in the second round, with most predicting Fillon to win.

But no one is ruling out Le Pen, whose anti-immigrant, anti-establishment message has found fertile ground among voters disillusioned with mainstream politics.

On Tuesday, she accused French banks of trying to thwart her campaign, saying she was having difficulty securing loans toward her presidential bid.

Meanwhile, one of Valls rivals, former Education Minister Vincent Peillon, set out his campaign on Tuesday, also promising to defend hard-up voters who feel “robbed of their destiny.”

Calling for a “European New Deal” led by France and Germany, he said “Europe was built by the transfer of sovereignty” from member states and that the process should not be unraveled.

Bashar Al-Assad will not govern Syria in the future: Al-Jubair