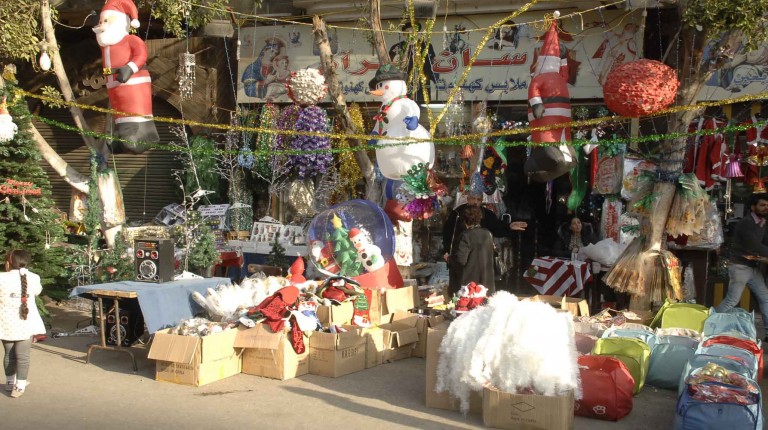 In the middle of the grey city, where timeworn buildings are full of cracks, houses’ colours faded from the dust, and people are gloomy, a couple of artists have decided to add some brightness to people’s world and polish their souls by drawing graffiti over the walls of one of Cairo’s oldest neighbourhoods.

The city of the dead is a large Islamic necropolis. It was once the final homes of Egypt’s most luxurious figures, before it turned into one of the ashwa’yat (informal housing areas) where people live amongst the dead. Looking at the city of the dead, one cannot help but see the disheartening grey colour— but then, two graffiti artists decided to change that.

Łukasz Zasadni and Arthur Chałupka are two Polish graffiti artists who came to Egypt based on an invitation of the Embassy of Poland and Archinos, a leading organisation in architecture and design.  The artists redecorated the city with their graffiti as part of a project called “Nietak”.

They spent more than a week drawing their favourite graffiti characters on the walls of the cemetery. Soon after, they drew on cars and kiosks, upon the residents’ requests.

“Both Chałupka and I are passionate art lovers, which led us to establishing our own company specialised in commercial work,” Zasadni said.

With bright green, blue, red, and brown, Zasadni drew his favourite cartoon character Mouse Franek Mysza, which he came up with 11 years ago. With wide, round eyes, and a smile, Franek the mouse looks cheerful and sends the joyful messages artists want people to sense.

“The mouse presents our street logotype,” he stated, explaining that the reason behind his decision of drawing mouse Franek was that “it is a simple form of cheering people up. Our mission is easy: make people smile just by showing them the mouse.”

“Cartoon style has always been my favourite style of painting,” he further clarified. “Everybody loves cats and nobody cares about mice. Yes, cats can be stronger but mice are usually smarter.”

Moreover, mice are everywhere in our lives “just like I want my paintings to be,” he added.

However, mice were not the only graffiti drawn over the walls of the city of the dead. While Zasadni was drawing Franek, Chałupka took charge of realistic graffiti by drawing scenes from the city.

Over the past years, both Zasadni and Chałupka drew their graffiti in several countries across the world, including Europe and Poland. “I painted a few thousand mice in most European countries, as well as in Morocco and now in Egypt,” Zasadni said.

For 10 days, Chałupka and Zasadni spent eight hours in the streets of the ashwa’yat with people who do not understand their language, the type of art they draw, or their culture. Despite that, both sides managed to get along and connect to prove that art unites people in spite of their diversities.

“The children were very happy and we became close friends right away. They even invited us for dinner one day,” Zasadni said

“This project helped us see how similar the world is. We are lucky to come to Egypt and be able to communicate with the people to know more about the [Egyptian] culture. We can now touch everything ourselves and know more about Egypt,” Chałupka added.

With every passing day, the bond between the artists and the cemetery citizens got closer, reaching a point of people requesting Chałupka and Zasadni to redecorate their homes, cars, and kiosks with their drawings. “Every day, the bond was getting stronger. People were amazed and then everybody wanted to paint a house or a car,” Zasadni recalled, adding: “We spent a great time with great people”.

Other than beautifying the area, participating in the project had the aim of supporting its residents. Chałupka and Zasadni aim was that through drawing graffiti by several artists from all over the world, the city of the dead might attract tourists due to the combination of the heritage and the art of the present.

“We hope artists participate in the project and that all the streets [of the city] will be painted like the Berlin Wall or the streets of Paris. Now in Europe, street art is a real tourist attraction such as in Barcelona,” Zasadni concluded.

In Video: Journalists draw graffiti at the press syndicate