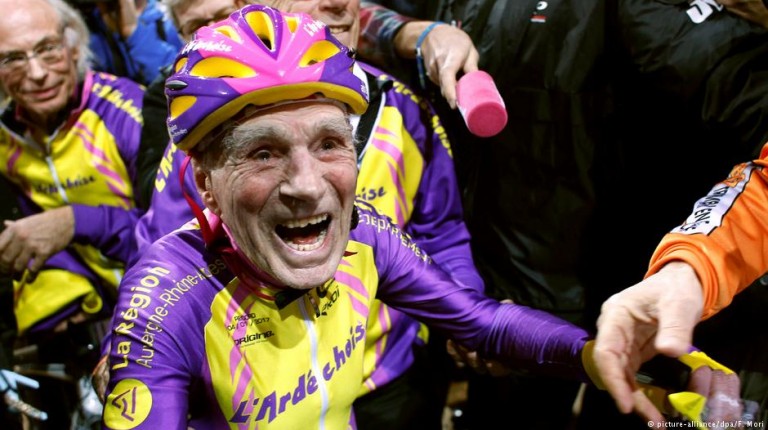 A 105-year-old Frenchman has set the first ever benchmark for cyclists of his age by doing 92 laps in one hour at a velodrome west of Paris. After the race, the athlete told reporters that he could have done better.French cyclist Robert Marchand covered 22.547 kilometers (14.01 miles) in one hour on Wednesday, receiving a standing ovation from hundreds of fans at Saint-Quentin-en-Yvelines velodrome outside the French capital.

“I’m not tired, my legs aren’t hurting, but my arms are. It has to hurt somewhere!” the 105-year-old told reporters after dismounting.

“I did not see the sign warning me I had 10 minutes left,” he added. “Otherwise I would have gone faster, I would have posted a better time.”

Even so, Marchand’s performance will go into cycling history as the first ever record for athletes of his age. By comparison, the overall one-hour record is 54.526 km, set by British Tour de France winner Bradley Wiggins in 2015.

“Now I’ll wait and see if anyone wants to take me on,” Marchand added.

Marchand was born in northern France in 1911, three years before World War I. Sometime in the 1920s, the president of his teenage cycling club told him he was not made for cycling because he was too small in stature.

Despite growing up to be only 1.52 meters (5-foot) tall, Marchand took up boxing and also became a national gymnastics champion. Over the decades, he worked as a firefighter in France, a truck driver in Venezuela and a lumberjack in Canada.

He started training cycling when he was 67 years old. He also cycled from Paris to Moscow in 1992, when he was already 81.

Three years ago, he performed a one-hour race in Saint-Quentin-en-Yvelines velodrome to cover 25.927 kilometers, nearly 3.4 kilometers more than during his latest performance.

“I’ve done sport all my life, eaten loads of fruit and vegetables, not too much coffee,” Marchand said before the race.

“He could have been faster but he made a big mistake,” Marchand’s physiologist, Veronique Billat, told the AP news agency. “He has stopped eating meat over the past month after being shocked by recent reports on how animals are subjected to cruel treatment.”

“If he starts eating meat again and builds more muscle, he can better this mark,” she added.

When asked if he had plans for a new performance years from now, Marchand said it was best not to make such long-term plans.

“You are nine months in the making. But it takes you only 30 seconds to drop dead,” he said.

Marchand trained for six months to prepare for Wednesday’s feat, cycling between 10 and 20 kilometers a day on a stationary bike in his Paris apartment.