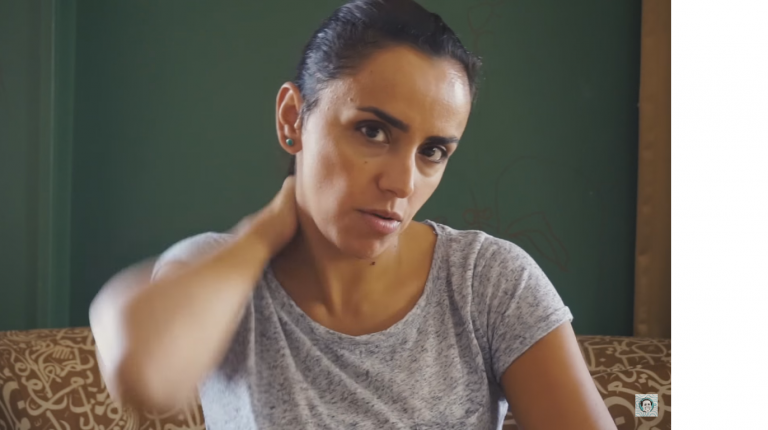 Over the past few years, posting home videos and online reality shows on social media became a part of the daily lives of hundreds of young Egyptian people who thought that this would be a good way to express their opinions freely and attract a number of followers and fans. Posting videos about travelling, cooking, makeup tutorials, fashion, and random life situations became a new trend and an innovative way to make money.

However, Ola Roshdy, an Egyptian actress, decided to think outside the box by filming a series of home videos that tell the everyday stories of her and her children. For her series, she chose the name Weghet Mazar (A Mother’s Point of View) to discuss the difficulties and hardships every Egyptian mother may face while raising her children. Because it is an interactive series, she expresses her thoughts and feelings and gets feedback from caregivers, kids, and professionals on the different topics she raises each episode.

“This idea was developed over the past year when I was doing research on children and motherhood,” Roshdy said. “It was initially meant to be a TV programme but I wanted to be able to reach every mother struggling to raise her children with a reality series that they could watch on their cell phones during their limited free time,” she added.

The project began when Roshdy posted short videos on her Instagram account of her and her daughter in the car. The videos appealed to hundreds of followers who asked her to turn them into a weekly show. The series focuses on mothers whose daily struggles and sufferings are neglected by many TV shows. At the time of writing, more than 32,000 people had liked her page. “Weghet Mazar is a reality series of a struggling mother dealing with everyday motherhood challenges. The episodes are fun and informative so that every mother, mother-to-be, or caregiver can relate and feel they are not alone,’’ Roshdy wrote on her Facebook page.

In Roshdy’s opinion, the comments on the videos are a free space for mothers to share their problems and provide advice on how to overcome these problems. The first episode of the series tackles the problem of hair lice, which is a big challenge for each mother who has children in school. In the six-minute-video, she appears alongside her children who in the beginning of the school year had contracted lice. In the video, she talks about how to deal with lice, mentions popular remedies to fight them, and warns of some of the dangers of traditional methods of removing them.

The episode also features a scene in a clinic, where Roshdy listens to medical advice and solutions from a doctor. In it, she asks him several questions that many people would commonly have about lice. At the end of the clip, she addresses some of the advice her viewers offered in dealing with lice.

“I usually choose the topics that interest me as a mother and I also like to talk about current and past struggles I have gone through,” Roshdy said. “I also engage with other mothers online to find the issues which they may be interested in the most.”

Before each episode, Roshdy also posts a short teaser about the topic of her next video.

The second episode tackles potty training, another big issue mothers have to face.

“I receive support from great creative people around me; however, I write the topics and film all the material on my phone,” Roshdy explained. “I have a wonderful editor, Hadi Basyouni, who also does the sound mix for my videos,” she noted.

However, the great success of the show was a big surprise for Roshdy. “People’s feedback has been incredible. I knew that mothers would relate right away to what I present but I didn’t expect such swift and supportive feedback.”

Apart from being a mother of two children, Roshdy was also one of the first comedians to introduce standup comedy to Egypt. She had been in a number of movies, including El Selem Wel Teeban and the famous sitcom Tamer & Shawkeya.

EU grants €30m for expanding access to education in Egypt

‘A child for sale’