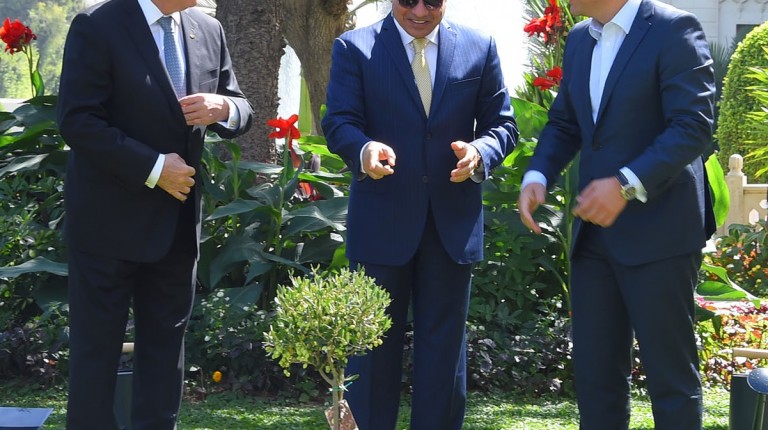 The fourth round of the trilateral summit between Egypt, Cyprus, and Greece concluded in Cairo with a final declaration in which the three countries agreed to work on the implementation of projects in the fields of energy, maritime transport, tourism, and agriculture, the Egyptian presidency said in a statement Wednesday.

“The current trilateral partnership serves as a model for furthering dialogue and promoting relations between the EU countries and the countries of the region,” the declaration said.

The trio insisted that a strategic partnership between Egypt and the EU is an essential framework for addressing pressing common challenges such as terrorism and extremist ideologies, migration, sustainable development, and achieving economic prosperity.

The illegal immigration crisis and the constant flow of refugees streaming from crises across the region were on top of the agenda. The declaration addressed the current plight of thousands of migrants suggesting two approaches. First, the boost of socio-economic growth for better opportunities. Second, combatting different networks of smugglers.

The trio further expressed concern over the escalation of violence and the deterioration of the humanitarian situation in Syria, especially in Aleppo, calling on all parties in Syria to fulfill their commitments to restore the cessation of hostilities and to allow the full access of humanitarian assistance to all besieged and hard-to-reach areas.

“To this end, They call for the immediate and full implementation of the 9 September agreement between the United States and the Russian Federation, and they also continue to support the efforts of UN special envoy Staffan de Mistura aiming at the resumption of negotiations to end the conflict through a political transition based on the UN security council resolution 2254 (2015) and the 2012 Geneva Communiqué, which meets the legitimate aspirations of the Syrian people,” the declaration read.

On Libya, the trio stated their support for efforts undertaken by UN special representative Martin Kobler to facilitate a Libyan-led political solution and underlined the importance of implementing the Libyan political agreement of Skhirat.

Regarding the Palestinian issue, the trio said it was concerned about Israel’s current moves on the ground, calling for a just and comprehensive peace settlement based on the relevant UN resolutions, establishing a sovereign Palestinian state with East Jerusalem as its capital.

They also agreed to work towards protecting the environment and achieving sustainable development, and discussed the decontamination of the Mediterranean Sea from domestic and industrial pollution and the impact of climate change on the marine environment.