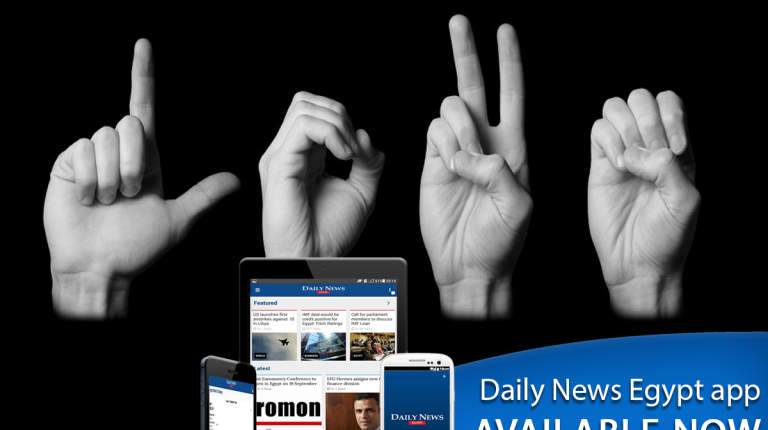 Sign language, like any other language, earns its importance in erasing the gap between different people by being used. In Egypt, while the deaf and mute represent 10% of the its population according to the latest statistics by the United Nations, the average sign language speaker is a rare bird.

The Declaration on the Rights of Disabled Persons acknowledges those in Egypt who have the right to be able despite their disabilities. The risks of entering university are huge given the low level of education quality in just a few schools that serves those in need of sign language. Teachers often don’t even know sign language.

There are scarce job opportunities and a number of problems facing the closed community of the deaf and dumb. Comparing these weighty problems with the contempt of society would be unjust, because the culture of Egyptians that mix the deaf and mute’s physical disability with mental illness, creating a mix of misunderstanding.

If a society accepted to promote the rights of disabled people, to have full respect, the right to participate and be equal, it would implant the root of equality. The segregation of the deaf and mute is distinct on many levels, for example, most talk shows don’t represent a sign language expert to communicate with the deaf and dumb. This sends the message that: “you are not worth the effort, you’re not important enough or maybe smart enough to be put in the public’s thoughtfulness”.

Egytian television did make an attempt to cloe this gap in 1989, when on one channel a sign language speaker was showed for the first time in a programme called “The challenge”. Then in 1990 came a steady appearance of sign language translators, which expanded in 2000 to reach the “Good morning Egypt” programme.

Another form of discrimination comes with employment and the right to a normal occupation. It makes sense to choose the candidate who can communicate in the common tongue, as sign language is restricted to the deaf and dumb. The Egyptian Constitution in Article 7 states: “The community based on the social solidarity”, and the Egypt Child Law states in its Article 78: “The Social Affairs Ministry establishes the necessary institutions to qualify disabled children. The Education Ministry builds schools or classes to teach disabled children according to their capabilities and readiness”.

These articles expose the missing balance in enforcing the law in Egypt. Sign language is the echo of the deaf and mute internal voice, and the echo of our internal and external voice. It’s the center point to creating a link to smash the marginalisation of people with disabilities, and to build a sturdy community grounded in equality.

Last month, Daily News Egypt held a writing competition in which followers were invited to submit an article on the topic of their choosing. Ten of the best articles submitted were selected by DNE. In the next phase of the competition, the top three that receive the most likes on Facebook will win cash prizes and a one-month internship. DNE is not responsible for the content of the selected.
Topics: deaf dumb Echo Erratic Echo Sign language

The Challenge of Autism: reading the signs and early intervention