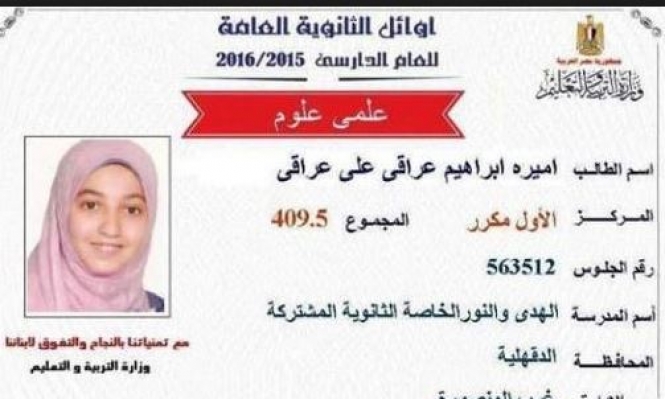 A social media controversy followed the announcement of pre-university thanaweyya amma results after it was claimed that the minister of education bypassed a long standing tradition of a congratulatory call to the nationwide exams’ highest-scorers.

Amira Eraqi, a senior high school student who was able to pass through the most lengthy exams period Egypt has witnessed in ten years, achieved the highest score in the science track. However, Eraqi only learned of her success through media outlets and not from Education Minister El-Helaly El-Sherbiny.

When the exam scores are announced, the education minister is expected to congratulate each student who scored the highest in the different exam categories.

“I don’t care about receiving a phone call from a suppressive regime’s education minister to congratulate me. This was expected since my father is unfairly jailed over fake charges. They jailed him just because he does not agree with the current regime’s policies,” Eraqi told Daily News Egypt on Monday.

Eraqi’s father is a nephrology professor at Mansoura University who is serving a life sentence after being convicted on charges of belonging to the outlawed Muslim Brotherhood and inciting protests in Rabaa Square.

“The current regime detained my father twice. The first time was during the aftermath of the deadly dispersal of the Rabaa sit-in, in which he was released on bail; however, he was detained again in January 2014 and referred to trial,” she said.

Currently, Eraqi is mulling over applications for a scholarship to a foreign university, whether inside or outside Egypt. She said that the current regime is focusing on oppressing opponents instead of supporting the education system and upgrading it.

“We [students] are suffering from Egypt’s catastrophic education policies. During the [two years of] thanaweyya amma, I relied heavily on private tutors instead of attending classes in school, which was abandoned throughout the year by both students and teachers,” she added.

Since the beginning of the exam season in early June, all exams were leaked on social media, mostly through Facebook pages, either prior to or during the exam time. The Education Ministry, however, denied that some of the exams had been leaked.

Eraqi believes the leaks are a clear sign of the “current regime’s failure and absence of a strategy to develop education”.

On the contrary, Basheer Hassan, the Education Ministry’s official spokesperson, denied during an interview with privately-owned channel Dream on Sunday evening that the minister intentionally avoided calling Amira to express his congratulations to her.

“In fact, the education minister does not know that her father is a Brotherhood member and we do not consider the political affiliation of students’ parents as ‘evaluation criteria’. Inside the ministry there are no registers of whose parents are Brotherhood,” he asserted.

Basheer insisted that the minister did not call Amira due to a lack of time, and not because her father is a jailed Brotherhood member as the rumours go.

“The minister called only eight students from the top ten list, but due to lack of time, he instead declared the rest of the names during the press conference held on Sunday afternoon,” he added.