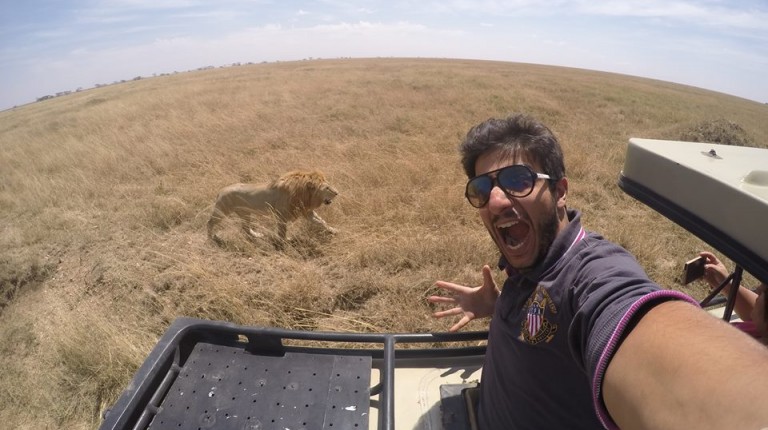 It sounds crazy, but it happened. I have slept in a tent that was only a few metres away from a pack of lions. I was in the middle of the savannah of Serengeti National Park in Tanzania. If I knew that this would be my fate, I may have thought twice before travelling to Tanzania for a wildlife safari. A wildlife safari is one of the greatest adventures one can experience, and it is something that will remain fondly in my memory for many years to come.

I am usually not easily overwhelmed by extraordinary sites. It is not very often while travelling that I become extremely excited about something; I am hard to satisfy. I was not always like this, but after travelling to 91 countries in total so far, I have started to feel less amazed by traditional tourist sites like the Eiffel Tower or Big Ben. However, when I travel to places in Africa there is some sort of magic. Whenever I hear music from different regions of Africa, or talk to people from different countries, or even look at the diverse landscape from the window of a plane, the young, crazy, excited traveller in me is reborn and I get goosebumps again.

Tanzania was the 71st country I travelled to and I have since visited 20 more countries. Though I visited many countries before, I had been dreaming of visiting Tanzania a long time before my journey. I was off with a professional guide and a 4WD into Serengeti National Park, one of the largest national parks in Africa. The park is stripped of the protective barriers you would find in a zoo, and instead it is a place to display animals living in their natural habitat. There are wild animals that go hunting, and there are a variety of animals and ecosystems.

Just before sunset, we arrived at our campsite, which was located in the middle of the savannah. My first question was: “Does this place have a fence?”

The answer was a surprising: “No sir, we are in the middle of the savannah and this is home for the animals, we’re visitors here.”

Shocked after hearing the scariest “no” in my life, I asked again: “So, what if we get attacked? Are we prepared for such a situation?”

The answer was even more shocking than the first one. The man responsible for the campsite said: “Don’t worry, nothing will happen. Hopefully.”

I said: “What do you mean exactly by hopefully? We are in the lion’s territory. Are you going to save me if a lion attacks my tent?”

The killer answer was: “Sir, even if I would like to save you in a situation like that, I would not be able to. But don’t worry.”

The longest night in my life passed. I laid in bed listening to weird noises from unidentifiable animals that could have been maybe two or three metres from the tent. I woke up at 6am and slowly unzipped the door to the tent just enough to peek outside and make sure it’s safe. I took a leap of faith and emerged from the tent. We ate breakfast, and I later found out that the weird noise at night belonged to a buffalo. But that was not what was most shocking. The owner of the place told me that I missed a fight between a group of 37 lions attacking a bunch of buffalos 10 metres from the campsite!

Fady Hanna is an Egyptian traveller who has visited 91 countries so far, seven world wonders, five continents, and dreams of visiting all 193 countries.