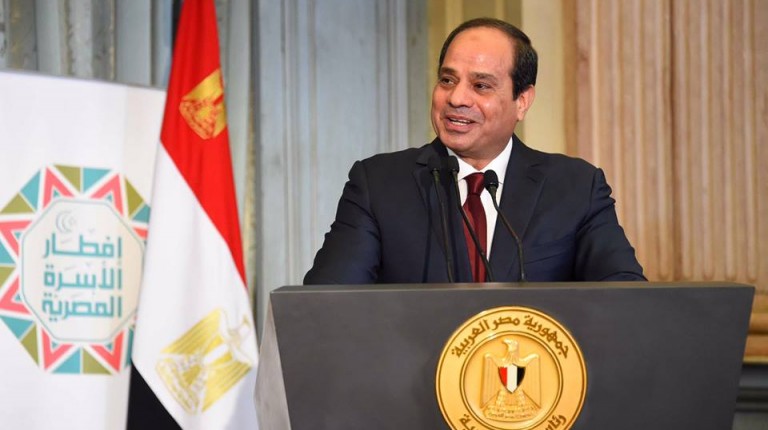 Several youth groups also took part in the event, as well as military academy students, intellectuals, authors, journalists, and the families of martyrs. Towards the end of the event, Al-Sisi gave a speech during which he discussed the country’s achievements since he became president two years ago, as well as his aspirations for the future. He asserted that among all of his goals, the country’s stability is the most important.

Al-Sisi implemented this new iftar tradition to “strengthen unity among us and  achieve Egypt’s  developmental goals”. Despite the president’s efforts, the event was marred by the absence of two heads of university student unions.

Both student union  presidents explained in online posts that they refused  to attend the iftar event because of their opposition to Al-Sisi’s regime, which they believe targets youth and students in security raids.

Salah and Morsi believed their presence would neither benefit the students they represent, nor  lead to an open conversation regarding conditions inside government universities.

Salah explained in his post that the students at his university are facing many struggles, including restrictions on their work activities inside university walls, interference by security services, and limitations on their freedom of expression.

Similarly, Morsi wrote an online post to explain his reasons for refusing the invitation, saying that he is not part of the “Egyptian family”. According to him, the real family consists of all the younth who have been detained.

Salah told Daily News Egypt, ”I had to explain my reasons; especially considering that other students from our university accepted the invitation and attended the event.

My post was welcomed by a large number of students from the university. I am the students’ representative and my role is to address their problems and suggest improvements. I was fully aware that I wouldn’t get this opportunity if I had attended,” he continued. He added that several students support his opinion and reasoning, asserting that ”it is very logical”. Salah has yet to receive a reaction from university officials regarding his post. The Deputy President of Helwan University, however, urged Morsi to write a post stating that his words were a representation of his personal views and not those of the whole student body.

Both Salah and Morsi have stated that the government neither welcomes nor accepts youth and students’ opinions. According to them, the government does not consider them part of the state, which begs the question of why they were invited to the event. The student union presidents’ posts have sparked controversy among social media platforms, as opposition groups and activists have expressed solidarity and saluted their decisions, while others have criticised them.

The Egyptian Family Iftar is a new tradition that Al-Sisi has claimed will be held  every  Ramadan. The aim is to unify Egyptians from across all social classes, and achieve social development goals for the country.