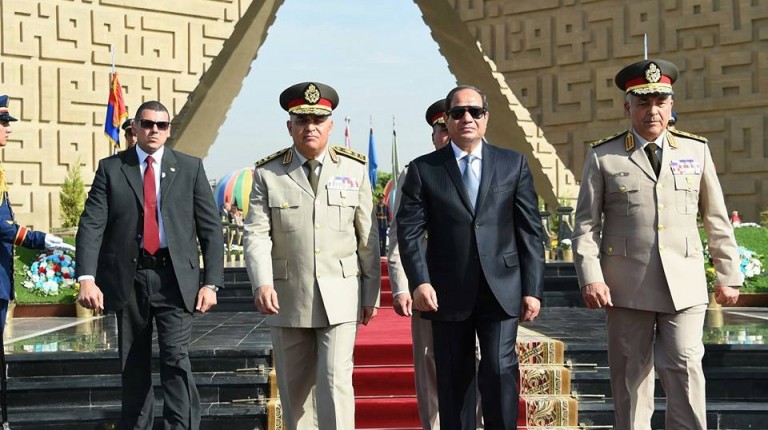 President Abdel Fattah Al-Sisi affirmed that government and Egyptians will “not allow” any attempts to threaten Egypt’s security or create chaos through “destroying state institutions”, in a Sunday speech commemorating Sinai Liberation Day.

The speech comes amid widespread calls for protest on Sinai Liberation Day, which is celebrated on 25 April and commemorates the withdrawal of all Israeli forces from Sinai in 1982.

The calls for protest came after momentum gathered from mass civil action, including demonstrations and lawsuits, over a recent deal between Egypt and Saudi Arabia. The deal would see the transfer of sovereignty of the Red Sea islands of Tiran and Sanafir, off the coast of the Sinai Peninsula, to the Gulf kingdom, pending parliamentary approval.

During his speech on Sunday, Al-Sisi said: “Still there are evil powers that aim to destabilise stability and safety inside Egypt. Over the last three years, we have succeeded in establishing state institutions, such as the parliament, constitution and presidency. The survival of these institutions means the survival of Egypt.”

Al-Sisi has frequently referred to “evil powers” in his speech, often without further elucidating on the nature of these powers.

He noted that Egyptian government and Egyptians are aware of these “evil powers’” plans to destroy state institutions and spread chaos, in reference to the calls for protest on Monday over the sovereignty transfer of Sanafir and Tiran.

Regarding the security situation in Sinai, he said militants’ activities in the peninsula have declined due to the “great efforts and sacrifices exerted” by the Egyptian armed forces and the police.

The speech tackled the economic situation in the peninsula, referring to several infrastructure projects that are underway in Sinai.

Meanwhile, a number of media reports indicated that a Central Security Forces (CSF) officer and two soldiers were killed on Saturday evening due to an improvised explosive device (IED) that targeted them south of Sheikh Zuwaid city in the restive north of the peninsula.

The explosion reportedly took place while security force were combing the area for explosives, in the framework of raids executed against “Islamic State” (IS) affiliated group “Sinai Province”, based in North Sinai.

No official statement has yet been issued by the Interior Ministry on the attack, while several social networks accounts affiliated to IS claimed “Sinai Province” was responsible for the attack.

Moreover, Al-Sisi referred in his speech to the spiralling prices of commodities, stating that orders were issued to the army to begin distributing 2m essential food goods in low-income areas.

Judiciary is vanguard in confrontation against ‘plots’: Al-Sisi

Al-Sisi calls for Iraqi sects’ unification to achieve national accord