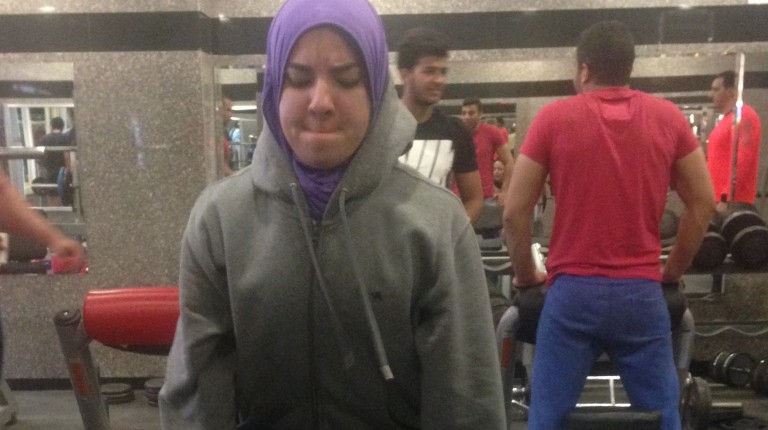 Tuesday marked the occasion of international women’s day, and Dina Saad met with Daily News Egypt for an exclusive interview. Saad broke the mould by officially introducing women’s powerlifting to Egypt on a competitive level, with the support of her coach Mohamed Saeed.

Saad was the first female powerlifter to represent Egypt internationally in the sport; she won gold in the 2015 World Powerlifting Championship, becoming the first Egyptian female world champion in powerlifting.

When did you start powerlifting?

At that time, there were no woman powerlifting competitively in Egypt, nor were any women registered in the Egyptian National Powerlifting Federation.

How did you start powerlifting competitively in Egypt?

In 2012, I saw an announcement for the national powerlifting championship and I asked to participateHowever, the coaches in the Shooting Club gym informed me that it was not common for women to take part in this competition.

Since then, I insisted that one day I would participate in a championship and I began lifting weights and training. In 2014, Mohamed Saeed came to coach at the Shooting Club and he was very supportive of my goals. He has contacts at the federation so he continued to relay my request to them and they finally approved it that year.

Afterwards, the federation contacted other powerlifting clubs to nominate women to represent their clubs in the national championships.

Now with every national championship, the number of women participating from other Egyptian clubs is increasing.

So now, is there an Egyptian female powerlifting team?

You’re the first Egyptian woman to win a world championship in powerlifting; how did you reach this stage?

I qualified to compete in the 2015 World Powerlifting Championship, held in the United States, as I won the national championship. It was the first time for an Egyptian woman to participate in an international powerlifting championship.

In the US, I couldn’t believe my eyes when I saw the female champions from other countries, such as Russia, US, and Canada, as they were so strong and powerful-looking. I didn’t think I had a chance!

Nonetheless, I won first place in the female division.

In which weight-class are you competing?

In the under 67.5kg weight division.

What are your future goals in the sport?

Personally, I would like to break a world record in my weight-class. I hope to compete in the upcoming 2016 World Powerlifting Championships; one will take place in Russia and the other in London.

Have you met with any obstacles or restrictions in the sport because you wear the hijab?

Not at all, quite the opposite; I find it to be a great means of support.

What is your opinion about females with six-packs and more defined muscles?

I respect what they have achieved. It is not easy for a woman to train and transform her body to be muscular or to develop a six-pack, because we do not have as much testosterone as men. Women have to work incredibly hard to achieve this goal.

Some people think that powerlifting should only be practiced by men and that a woman who lifts weights will lose her femininity. What is your opinion of this stereotype?

Some people assume that as soon as a woman starts lifting, she will suddenly have, for example, a hoarse voice, wear an ugly ponytail, and grow a moustache. Whether or not a female powerlifter displays any of these characteristics is not down to the sport. It is just her personality and how she prefers to be.

I do not care for these negative stereotypes.  We need to raise awareness so that people can accept that woman could practice this sport and still be feminine. In fact, when I started lifting weights, my primary goal was to shape and tone my body.

So contrary to popular belief, weightlifting helps an athlete develop strong curves, burn calories, and increase her level of fitness. In other words, the sport helps an athlete to maintain and preserve her femininity.