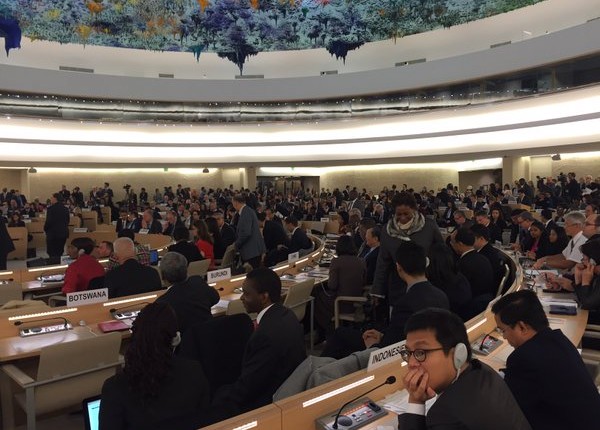 During the 31st session of the UN Human Rights Council, held at the HRC headquarters in Geneva, 17 Egyptian human rights organisations made a speech detailing their concerns over violations committed against defenders of human rights in Egypt, such as travel bans, threats of assault, and extended illegal periods in pre-trial detention.

According to an official statement published Friday by the Cairo Institute for Human Rights Studies, the organisations speaking at the session said that, since the beginning of 2015, at least 13 Egyptian human rights activists have been prohibited from travelling, including journalist Hossam Bahgat, and political activists Gamal Eid and Israa Abdul Fattah.

Director of the institute Bahey El-Din Hassan met with UN secretary-general Ban Ki-moon, Norwegian deputy foreign minister Tore Hattrem, and US assistant secretary of state for human rights Tom Malinowski to discuss the deterioration of human rights in the Arab world, especially in Egypt, and ways to advance these rights.

They also discussed the challenges of counter-terrorism in countries where governments largely exploit such efforts as a cover to suppress certain groups, whether secularists or Islamists. These include political opposition, trade unions, journalists, writers, and secular and Islamist thinkers, as well as independent cultural platforms, football fan associations, school students, and human rights defenders.

The organisation’s speech also condemned pre-trial detention, which is used as a means to imprison activists, such as Aya Hegazi and seven other activists who are still in detention past the maximum period of two years of pre-trial detention. “Activists like Mahienour El-Massry , Ahmed Maher, Alaa Abdul Fattah, Ahmed Domaa and others are imprisoned as a result of their right to peaceful gatherings.”

In their speech, the organisations demanded the prompt release of all detainees jailed for their right to freedom of expression. They also questioned whether an inspection of the status of human rights in Egypt could be carried out and what action would be taken if such a visit was prohibited by Egyptian authorities.

The official Twitter account of the US department of state published statements Wednesday from deputy secretary Antony Blinkenin’s speech at the session, in which he expressed the US’ concerns over police abuses and violations in Egypt. “We are deeply concerned about alleged police abuses and arbitrary arrests in Egypt, we support Egypt’s efforts to face terrorism, but achieving peace and stability requires guaranteeing safe climate for peaceful opposition.”

According to the state-run MENA, Egyptian permanent representative in Geneva Amro Ramadan attacked Blinkenin’s statements about the human rights situation in Egypt, saying the council does not need advice from a state that violates human rights itself, referencing Guantanamo Bay.

In mid-January, poet and activist Omar Hazek was also briefly banned from travel as he was departing for the Netherlands to receive an award celebrating freedom of speech.

Travel bans have also extended to activists such as Mohamed Lotfy, director of the Egyptian Commission for Rights and Freedoms (ECRF), in June 2015, and activist Esraa Abdel Fattah in January 2015.