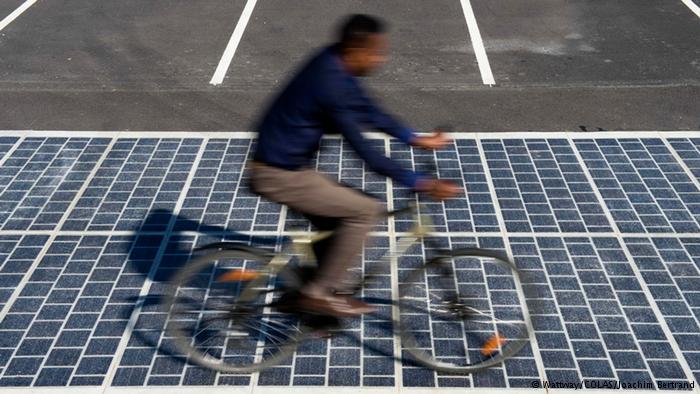 France recently announced plans to install 1,000 kilometers of solar roadways. But why solar-paneled roads? How do they work? Are they really worth the cost? DW’s environment desk takes a look at the pros and cons.
Dark solar paneling covering the streets and harnessing the power of the sun to produce electricity – is this a vision for the future, or just science fiction?

According to reports, French environment minister Segolene Royal recently announced plans for France to install 1,000 kilometers (621 miles) of photovoltaic solar paneling on its roads over the next five years.

It’s not the first time such a concept has been tried. In the Netherlands, a 70-meter solar bike path was reported to have exceeded expectations by producing more than 3,000 kilowatt hours of electricity – enough to power a small household for a year.

But does that mean we should all be getting ready to pave our roads – not with gold, but with solar paneling that captures golden light – as a way to move forward with green energy goals?

The aim is to use surfaces that already exist – roads, parking lots or even industrial grounds – that could all potentially be sites for solar panels. “If we use places that we use as streets, it means we don’t need to use natural areas or fields,” said Donald Müller-Judex, head of Solmove, a company vying to be the first to introduce solar paneling to German roads.

With more than 10.5 million kilometers of streets in the European Union – and 650,000 kilometers in Germany alone – that’s a lot of roadway that could potentially be used to capture the sun’s energy.

According to news reports, France is planning solar roadways as part of a broader “positive energy” initiative to power homes with renewable energy.

Can any paved area be used for solar roadways?

Heavily used highways do not make the ideal surface for solar panels due to the potential problem of shading, which can make them ineffectual.

That factor could make any roadway a problem, Craig Morris, author of “Energy Switch” and contributor to The German Energiewende blog, told DW. “Shading kills solar, and you must have shade if there are cars,” he said.

Müller-Judex agrees, but says highways won’t be used for roads with solar panels, rather small streets between villages and at locations such as industrial sites. “We will look for these places where there is less traffic and a high amount of sun – there are lots of places we could use.”

How much energy would solar-paneled roads collect?

The idea is fairly new, so it’s still yet to really be tested. But French authorities estimate that with 1,000 kilometers of solar-paneled roads, it could generate enough electricity to provide power to 5 million people, or about 8 percent of its population.

Müller-Judex says solar-paneling on roadways would likely be less efficient than solar parks – but he estimates that for every square meter of solar roadway, 100 kilowatts could be produced per year.

“30 square meters would have one household supported or one electricity car charged for one year for 11,000km,” Müller-Judex estimated.

But Morris is skeptical. He says the fact that the panels would be lying flat means they would not capture as much energy as those in purpose-built solar parks, or even on rooftops. “They should be at a 30-degree angle,” he told DW, whether on rooftops or mounted at the ground.

What about other disadvantages?

Potential challenges lie in keeping the panels clean and working, as well as making sure they are resilient enough to take the weight of vehicles, big or small. “We don’t drive on glass for a reason: it’s not a great surface for roads,” said Morris. “A lot of thinking has gone into road surfaces,” he added.

But Colas, the firm reported to be building the roads in France with its creation, Wattway, says on its website that has overcome this challenge with “cells inserted in superposed layers that ensure resistance and tire grip.”

Müller-Judex says the issue of cleaning is also being dealt with.

“We are developing special technology to clean the surface of the panels – chemicals that destroy micro-particles, which are then blown off or washed away by the rain.”

What about the cost?

Cited as one of the biggest downsides, installing solar roadways will definitely be more expensive than standard asphalt – although the exact price is still unclear.

Müller-Judex estimates that each panel will cost around 200 euros ($224) per square meter, a little more than it costs to install panels on a roof. But he says that price will fall.

“I think one day we will have the same price as other technologies. In 25 years it will be much lower than normal road – solar roads will earn money. We need time to develop a mass market.”

So, should we cover our roads with solar panels?

It remains to be seen whether the project makes sense. Morris worries that if such a high-profile project goes wrong, it could have negative effects on future projects around solar and other renewable energies.

And although Müller-Judex admits it is not certain that it makes sense from an economic perspective, he says society should give all possibilities a chance. Rooftop solar – by now massively successful, and largely mainstream in countries like Germany – was once also an experimental technology.

“We are trying to improve the concept with every new step. I believe that one day we will have a good product,” Müller-Judex concluded.