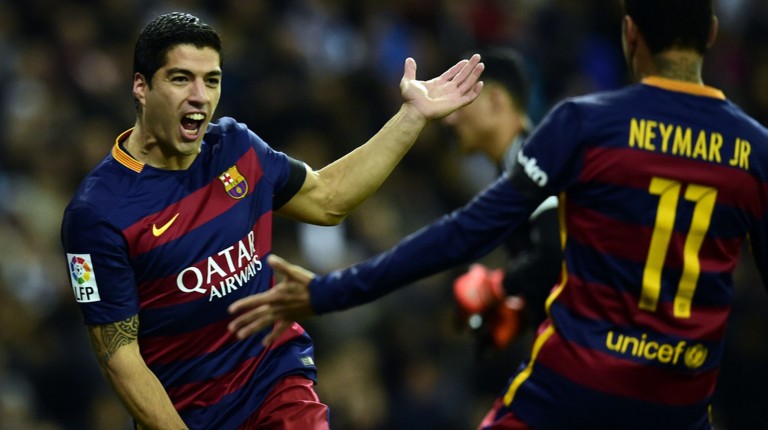 Whenever Barcelona and Real Madrid meet in a Clasico, news agencies and sport sections in both global and local newspapers, along with every follower and lover of football in the world, tend to focus on the most important, the best and most famous two stars in the charming world of football: Lionel Messi and Cristiano Ronaldo.

But in last Saturday’s match, neither Messi nor Ronaldo was the star of the game. The Argentina star missed most of the game due to injury, although he played well, as usual, for the short time he was in action.

Ronaldo played, but his heart did not seem to be in it – focussed instead on France. His time at Real is about to expire, and this was reflected in his poor performance against the team’s arch-rivals, Barcelona.

Real Madrid lost 0-4, with Barcelona even missing a number of goal opportunities.

The match was among those of week 12 in Spain’s Liga BBVA. The game involved a great performance by Barca, which continues to lead the rankings with a score of 30 points – four points away from the runner-up, Atletico Madrid, while Real Madrid slipped to third place with 24 points.

Barcelona and Uruguay striker Luis Suarez continued to draw all the attention. Along with the Brazilian Neymar, Suarez ensured a great win, scoring two goals himself, the first just 11 minutes into the game.

The magical duo has scored 23 goals out of Barcelona’s 29 goals in La Liga so far this season, which is about 80%. Neymar scored 12 goals and Suarez scored 11.

In Saturday’s match, Suarez had four attempts to score, three of them on-target , giving him an accuracy rating of 75%.

Suarez also made a scoring opportunity for his team in the seventh minute of the match. His passing accuracy was 56%, and he managed to steal the ball four times from Real. In dealing with aerial plays, he boasted a 100% success rate. He also carried out his defensive role admirably, successfully getting the ball out of his team’s half four times and only committing one error. It was no surprise when Suarez was chosen as man of the match.

Meanwhile, Karim Benzema played one of his worst games with the team, failing to halt the decline in his performance, which may have resulted from the legal problems he is facing. The French player was unable to save Real and only had two attempts on goal, one of which was blocked by Barcelona’s goalkeeper, the other stopped by the defenders.

Even though his passing accuracy was of 82%, most of the passes were away from the danger zone, posing no threat to Barcelona. Benzema offered nothing in the game, apart from being in the right place when the ball was passed to him and then losing it again. He also did nothing to aerial plays and failed to steal the ball from his opponents. The French international appeared, like most of his teammates, in a deplorable state!