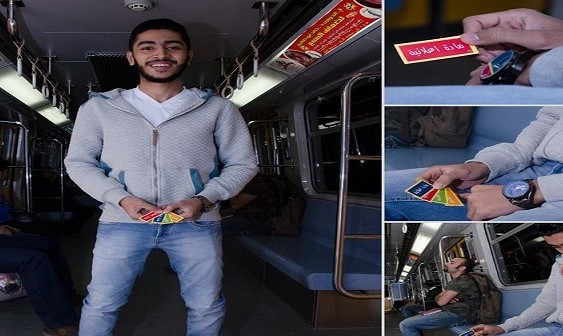 An Egyptian entrepreneur and copywriter Ahmed El-Temawy responded on Tuesday to a statement by the Transportation Ministry on a project idea he proposed in April regarding adding advertisements on underground metro tickets.

El-Temawy’s denied he acquired UAE citizenship, however, his response to the ministerial comments reflected alleged bureaucracy from the Egyptian officials’ side in implementing his idea.

In a statement on his personal Facebook page he said: “I will not implement the project in Egypt because I am not able to sign a contract with the Metro authority unless I enter an auction with advertising agencies according to the conduct code.”

“I will not be able to enter this auction unless I have at least five year of experience and it could be more,” he added.

According to El-Temawy, the project preparation action steps were 90% complete as he already received offers from various advertising agencies. However, he was informed of those two conditions during a meeting with head of the Metro Authority, Ali Fadaly, and hence he will immediately begin implementing the project in the UAE or Austria, as they showed their support for his idea.

Four days after El-Temawy announced on Friday that his project will be implemented soon in the UAE instead of Egypt, Ministry of Transportation spokesperson Ahmed Ibrahim denied allegations and reports claiming official obstruction of El-Temawy’s project idea.

“Only one agency proposed a deal in a bid launched by Metro administration among advertising agencies, and it was worthless. They proposed implementing El-Temawy’s idea by paying EGP 3m for every 350m tickets, which eventually means every ticket will be worth nearly one penny.”

He added: “Despite the fact that the deal was not attractive, we agreed to proceed with it to compensate for the Metro’s annual losses, which are upwards of EGP 250m.”

A Faculty of Law student in Cairo University and a copywriter, El-Temawy proposed his project plan to the transportation ministry, and met with minister Hany Dahy in April, after three years of work.

At least three million Egyptians commuted using the underground metro every day by 2014. The advertisement idea was estimated to gain enough revenues to cover Metro employees’ salaries for three years.

A few days before he met Dahy, El-Temawy explained his idea on his Facebook account and the post went viral with at least 7,000 shares, while media organisations featured him and the project after the ministry’s meeting.

Dozens of other Egyptian entrepreneurs and innovators have proposed ideas for development but suffered bureaucratic rules and did not find enough support to grow.

Mostafa El-Sawy, a young innovator who won a UN award as best innovator in 2014 for his project Smart Dam, is now officially a UAE citizen, studying in one of its schools, after encountering very little support in Egypt.