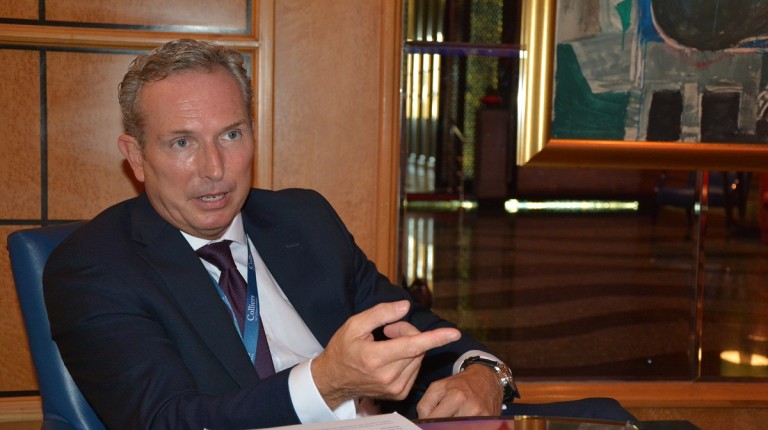 In an interview with Daily News Egypt, Ian Albert, Regional Director at Colliers International Middle East & North Africa, said that the main challenge the real estate market faces is in infrastructure, despite the government’s efforts.

How do you evaluate the Egyptian real estate sector?

There is a lot of intention within Cairo’s real estate market, more than anywhere else. If you look at all sectors in the Cairo market, we talk about residential, hospitality, office space and rental units, with all of them in a growth map. The residential demand is growing 2% in Cairo. The national demand is around 90,000 residential units each year, so that under demand the market is developing. For the rental market, the sector changed in the last three or four years which led people to access different goods. There is change in demographics which applies to residential and rental units, as 70% of the population are now in the middle-income bracket of $25,000 pa income, so that in the last couple of years we have seen a growth in shopping, which increased the rental demand.

Regarding office space, the evolution of Cairo is moving forward where there used to be a small percentage of office buildings, with the rest being residential buildings. But in the last two years, the demand is moving towards office buildings, as we see in the Smart Village and other places.  Now there is a great demand from local and international companies for office buildings. Egypt’s hospitality sector is split into two sections: namely, tourism hospitality which is particularly focused on Sharm El-Sheikh; and business and regional tourism, in which the Cairo market will grow 7.5% over the next four or five years. Moreover, 70% of the market in Cairo hotels are from Egypt and the GCC, which reflects where the growth comes from.

In your opinion, what challenges does this sector face?

The issue in Egypt is the infrastructure. The government has made significant moves in this area, but if we look at Nasser City or 6th of October City, these were developed and grown by Cairo itself. Therefore, we still have the issue of where the development is coming from.

How do you evaluate the social housing projects under the Ministry of Housing and Mortgage Finance Initiative set by the Central Bank of Egypt?

How do you evaluate Egypt’s real estate prices, and do you expect price increases in the coming period?

If we look to the shift that happened in Cairo, we will see that there is a big move to New Cairo, with hotels, offices and residential units moving to New Cairo, which is why the prices increased. The increase in prices is due to high inflation, which has been increasing in Egypt for many years, alongside the currency’s devaluation during the political changes, which pushed the prices up.

On the rental market, for example, we have seen that, I think villa rentals are down by 4%, or maybe a little bit more, in the last 12 months. The reason is that, these developments that were sold off plan two or three years ago, are now being delivered to the market. Therefore, we do anticipate that growth is going forward, but not the growth we have seen in the last couple of years. The growth in the last two or three years has been 64% for villas, and I think 27% for apartments. The economy is starting to grow, inflation has decreased, and the currency is stable, so we expect growth we have not seen before.

You mean that we can expect to see growth next year and the year after?

Yeah, we will see this sector’s growth, but slower than before. We are not going to see the same growth.

Do you think that therapeutic tourism will grow? What are your expectations for this sector, and will this compensate for the drop that happened in Egypt in the last four years?

Medical tourism is the big thing everywhere. There are many new medical tourism centres. They are trying to do this in the GCC; Jordan is very successful in this field. If we look to where GCC nationals go as well, they go to Jordan. In terms of the quality of prevention, the Egyptian health care system is good in the private sector. The government sector has little participation, but again that is a similar story around the world. No health care system is perfect. However, the growth in the private sector healthcare system is very promising in Egypt. If you look at medical tourism, one area can benefit Egypt. It is one of the stories that we will look at later on.

Which are the most attractive areas in Egypt for real estate projects and developers?

The developers now have a hot spot in Cairo. Their eyes are on the middle-class bracket of $10,000-$20,000 income for residential apartments.

Depending on the size of the developer, the small ones will head into smaller residential units and apartments, while big developers look to the hotels and shopping malls. In this sector, 6th of October City, Tagamoa and Nasser City are the most promising.

How do you view the new administrative capital project?

The Cairo Capital City is an interesting project. These were new developments that at the time they were announced [at the Economic Summit in March 2015], were praised, but they asked about its size but were told that it can’t be developed and can never be finished on time. In terms of what will be done for Cairo, I say the city continues to change. This year, everybody moved to New Cairo. When I was there six or seven years ago, everyone was in Zamalek. That was the trendy place. Now, people are moving out of Zamalek to New Cairo. Cairo continues to evolve and grow. The new capital will be another phase of Cairo’s growth.

What is the growth you expect in terms of the real estate market?

I think we have got some numbers in the report in terms of different areas. Each year, new units are being built. Therefore, you have a gap of 50% each year going forward. However, if you think about 45,000 homes being built each year, it is a massive number.

Egypt’s tourism real estate sector has suffered. Can you explain what these issues were, and who are the stakeholders – are they banks or developers?

The main stakeholder in the tourism sector is obviously the government, both in terms of the tourist authorities bringing tourists into Egypt, and also the Ministry of Tourism which owns a number of the large hotels. Then you have the private sector, which is represented more in Sharm El-Sheikh and places like that. If we look at what has happened in Sharm El-Sheikh in the last couple of years, it has experienced a downturn. Obviously, we had some difficulties, and some of the Libyan troubles crossed the border as well, which caused tourists to leave. The government is making significant efforts in terms of security and stability, and paying more attention to this sector to push and develop it, and it is picking up.

However, the other good news for Sharm El-Sheikh is that it is the European destination for the sun and beaches. The Russian market is always strong in Sharm El-Sheikh. The Egyptian government took a very smart move earlier in the year, as it devaluated [the Egyptian pound] against the rouble. It was a very clever move, and nobody else has taken this approach to improve the tourism market. Therefore, Sharm El-Sheikh will slowly pick back up.

In terms of Cairo itself, occupancy rates are still seeing growth of approximately 7.5%, and it is moving forward. However, the Cairo market is very different from the tourism market. We hope to see more tourists coming into Cairo.  To sum up the most promising area for the visitor market is Cairo, where tourists want to go to the beach or see the Pyramids, alongside business tourism, which is very big in Cairo and which continues to grow. We see new hotels are being opened in New Cairo, such as Swiss Hotel. That is a sign that the international brands, which are now about 65% of the market here, have confidence in the local market and 85% of those are 5-stars hotels. The international brands are bringing names back into Cairo, and they come because they know that there is a market here.

How do you see the new real estate regulation, which expected to be issued?

Actually, I don’t know the details about its items. I’m going to wait and see what exactly comes out of this. As soon as we get reports, we are going to sit down and see what the impact will be.

If it is issued, do you think it will help?

I think the issue in terms of regulations is always the same. Regulations should clarify and make things easier.

According to my information, Arab investors are the most interested in Egypt’s real estate market. Is this correct?

Most of the investors interested in the Egyptian real estate market have always been from the region, and the GCC in particular. They have always been here. Kuwaitis have for long been investors, as well as investors from Saudi Arabia and the UAE. The GCC has always been the main investor in Egypt. They understand the market, the growth and absolutely they make a profit. In addition, they know the Egyptian culture well.

So, what about foreigners, foreign companies, or investors? Do you expect there will be new investments?

I think Western companies will come in time. In terms of investment in real estate, the Western world is still trying to sort itself out regarding its own problems, before turning itself to a market it is not familiar with.

What are your expectations regarding the outcome of the Cityscape conference? How do you see these exhibitions help Egypt’s real estate market?

There are two conferences going on. You have the Cityscape real estate summit and the exhibition. The summit gathers the core delegates and stakeholders, who will be spending money from a development point of view. In the exhibition, we see the companies who are offering their products. We come to these conferences, because they provide us with two things. They provide us with business contacts, for when you look to establish new business relationships or to reinforce your existing business relationships. The other thing that they provide is a talking shop. It is where you can get a feel of what is happening below the surface.

Developers will talk here, and they will say these are our issues. Therefore, you can start to get a feel of the market, through this feel you can see which trends go up and which trends are going forward. Honestly, we will wait and see. It really depends on what is happening out there at the moment. We are very confident on the four main sectors of tourism, rental, residential and commercial real estate. By the end of the week, we hope to get a sense of where developments are moving and in which of these sectors.

Cairo’s occupancy levels for next 3 months forecasted at 58%: Colliers International