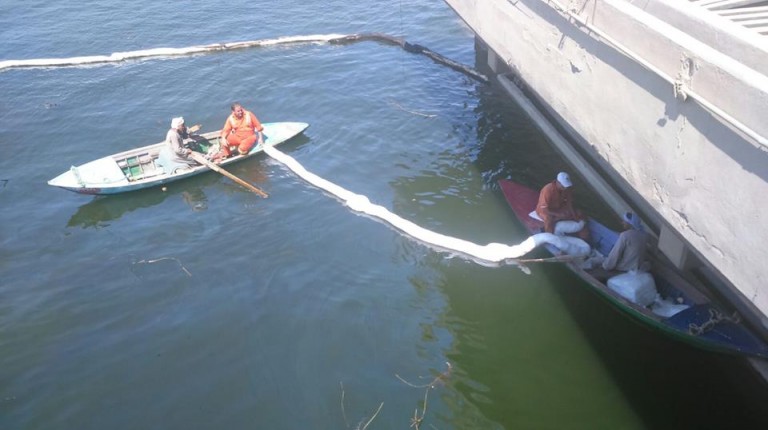 The Minister of Environment Khaled Fahmy, along with officials in Assiut and Beni Suef and President of the Central Administration for Environmental Crisis, Kawthar Hefni, visited Assiut on Friday after leaks from an electricity pipe spilled into the Nile river.

The officials’ visit sought to ensure that the river is free from oil pollution.

The Mazzot flammable substance leaked from the cool water unit of Al-Hamra electricity station in Assiut on Friday. The leak was 15 metres long, 3 metres wide, and 2 to 5 cm in depth.

Fahmy ordered a full scan of the Nile starting from Minya to Assiut, however initial investigations found no traces of pollution in the Nile. A technical committee was formed to investigate the incident.

“The oil spill has not affected the Nile’s water; water companies will take regular samples to ensure that the water is free of pollution,” Fahmy said in an official statement on Friday.

The weather factor had a role in diminishing the oil spill and it is only limited to in front of Al-Hamra station. As the sun shines and the temperature increases, the oil spill diminishes and part of it diverts to Al-Ibrahimiya’s lake, according to the Ministry of Environment’s statements on its official Facebook page.

The statements said that ten water stations were closed by the authority of drinking water, while Fayoum’s station is under scrutiny as it has announced a state of emergency after the Assiut leak. Assiut station was also closed until safety of drinking water is guaranteed as the spill will travel North by the air current.

Fahmy said that he cannot hold anyone responsible until the technical committee completes its work, but that each company must have a plan to face the crisis.

A similar case occurred in late April when 510 tonnes of phosphate submerged near Qena when a barge transporting the chemical material capsized after colliding with the Dandara Bridge.