Over the past 10 years, the Suez Canal has taken a large portion of the vessels crossing the Panama Canal through the maritime route between Asia and the eastern coast of the US. Despite the shortness of the route through Panama, shipping companies prefer the Suez Canal due to its larger capacity, the economic consultant for the Head of Suez Canal Authority, Abdel Tawab Hagag told Daily News Egypt.

For nearly 100 years, the Panama Canal has been a key link in international shipping routes, handling an estimated 5% of world trade each year..

However, with a maximum capacity of five thousand containers per shipment, the canal is not as wide nor as deep to keep up with the growth of Asian economies. This led the Panama Canal Authority (ACP) to decide on the expansion project in 2006.

The Panama Canal Expansion Project will create a new lane of traffic along the canal through the construction of a new set of locks, doubling the waterway’s capacity.

The expansion project implementation began in 2007 and is expected to be inaugurated on 1 April 2016, with an overall cost reaching $5.25bn.

Furthermore, another project is proposed to take place: The Nicaragua Canal. It will connect the Pacific Ocean with the Atlantic Ocean, through a 278 km canal that will be longer, deeper and wider than the Panama Canal, according to Zhu Xiaoya, from the Hong Kong-based company HKND, in an interview with the BBC in November 2014.

Besides, the Suez Canal has no competition in the navigation road linking Europe and the far east, where 100% of the vessels pass this journey across the Suez Canal, according to Haggag.

The Suez Canal has the privilege that it is an open navigation waterway, while other canals such as Panama and Nicaragua use the locks systems, which cannot handle huge shipments that an open waterway can handle.

“Moreover, the new Suez Canal Axis will reduce the vessels transit time with about eight hours, which is a huge deal for a ship that costs from approximately $14,000 to $200,000. This will increase its international competition,” Haggag added.

The project of the New Suez Canal Axis has shut the doors in the face of any other canal project proposed in our neighbour countries, such as the proposed Israeli canal or railways to cover the surpass of Suez Canal, Hedaya added.

Furthermore, former president of the Red Sea Ports Authority and maritime expert Mahfouz Taha confirmed that the Panama Canal operates through the transatlantic and transpacific maritime routes, which are far from the rotes crossing the Suez Canal, such as the shipping route between the East of Asia and the states of the Black Sea, and East and West Europe and the East Coast of the US, which means the operational competition is almost non-existent.

As for the technical competition, Taha emphasised that there is no competition, as the Panama Canal operates with the blocks system with a depth of only 15.5 metres that cannot handle all of the cargo vessels, while the Suez Canal is an open waterway with a depth of 24 metres.

The new Suez Canal Axis, inaugurated on 6 August, targets to double its capacity of ships to reach 97 ships, compared to the current capacity of 49 ships. As a consequence, it also targets doubling its revenues through the new 72 metre axis.

While the Panama Canal expansion project is in its final phase, Jorge Quijano, who leads the PAC, is already looking beyond this project to a fourth set of locks, which would serve a new generation of even larger ships that can carry 20,000 containers, Reuters reported on 26 March 2015.

“Looking at our geology and the experience we gained with this current expansion, we estimate it’s a project that could cost between $16bn and $17bn,” he told Reuters, adding it would allow Panama to compete head-to-head with Egypt’s Suez Canal. 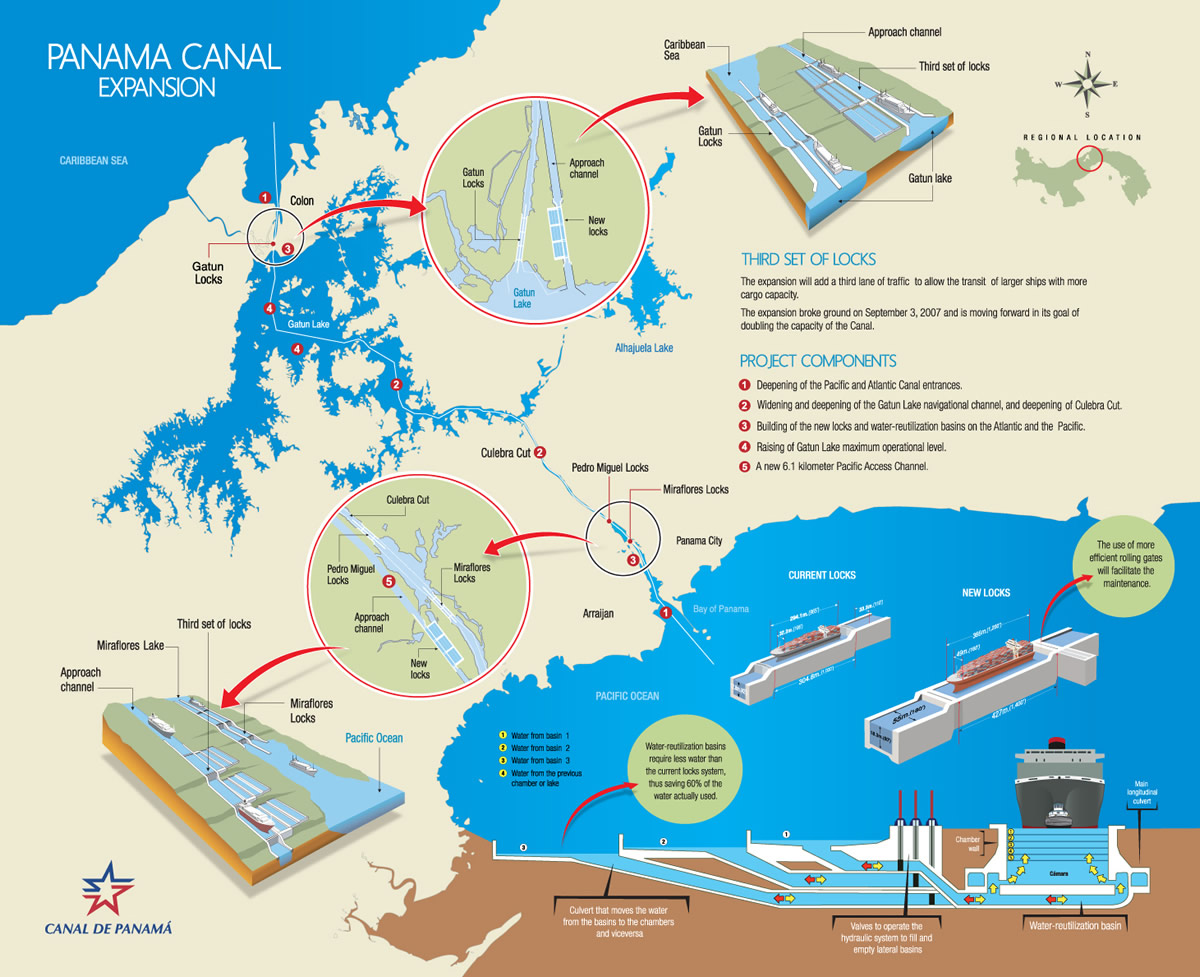