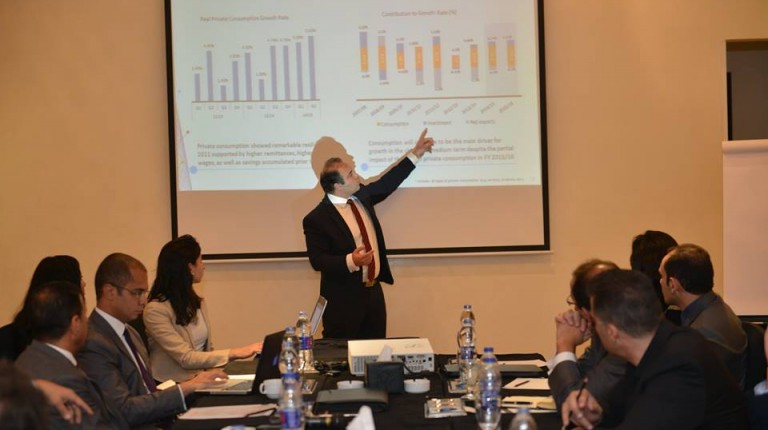 Chairman of Dcode Economic and Financial Consulting Mohamed Farid expects inflation indicators to rise, while the purchasing power of consumers will be reduced with the enforcement of the value-added tax (VAT) law, set to be approved by the government before the end of this year.

Farid said that his company held a roundtable meeting with Nielsen, a company specialised in market research, on Thursday, in order to examine the draft of the VAT law, and its impact on economic activity.

The Dcode-Nielsen alliance agreed to hold a roundtable meeting on a quarterly basis as a platform for professional debate between corporate leaders and senior manufacturers on the directions and shifts in the market, as well as reintroduce business practice methods, according to Farid.

According a press release, Nielsen, a Global information and opinions company, along with Dcode, have unified their efforts in order to provide strong outlooks for variables in the Egyptian economy to propose marketing advice for pioneers of the industry.

The first meeting, titled “How does the VAT law affect your work?”, focused on monitoring and analysing the key points discussed during the recent Egypt Economic Development Conference (EEDC).  In addition, it thoroughly examined the new law and its impacts on economic activity, while offering untraditional proposals to pioneers of the industry for them to cope with the law.

The Dcode-Nielsen alliance was keen to invite major investment companies operating in Egypt in order to ensure true measurements of the impacts of the law on all economic sectors.

General Director of Nielsen in North Africa and the Levant, Tamer El-Araby, said: “The results of the study conducted by the company shows that only 20% of consumers are aware that there is an impending increase on VAT on their usual purchases.”

“Price increase becomes an obstacle when there is an issue in the buying behaviour, because the unjustified increase represents a great danger on the loyalty of the consumer,” said El-Araby.

Furthermore, Farid said that the additional tax revenues expected are roughly at EGP 32bn for the next fiscal year (FY) 2015/2016, as per the government’s announcements.

“The tax rate will range from 12.5% to 15%, which will create a huge impact on the inflation indicators. Additionally, inflation indicators are expected to increase by  between 2% and 3.5% once the law is applied, before inflation retreats to normal rates. Producers usually let consumers carry the burden of the tax cost,” Farid added.

He warned that the social effects of the rise of inflation and decline of the consumer’s purchasing power will be huge, especially with regards to food products, which represent 40% of provate consumption.

Private consumption is the main factor for Egyptian economic growth, with an average of 2.1% in the last three years, and it represents more than 80% of the Egyptian economy. On the other hand, food and drinking products prices increased by 58% since January 2011, added Farid.