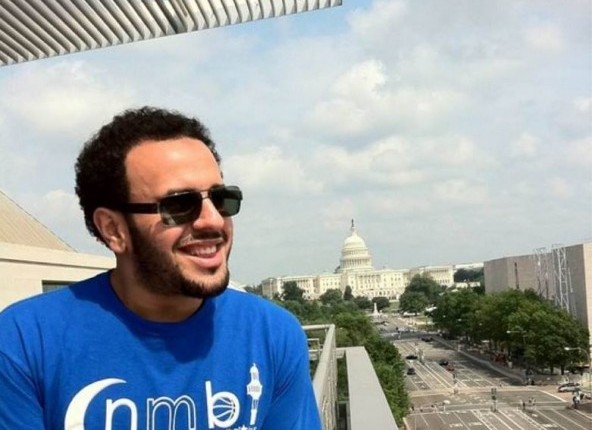 From Ohio to Liman Tora Prison

Mohamed has always been a generous person, and one to come to people’s aid without them asking, said Asmaa, Mohamed’s mother.

“As a child, he was hyper-active and very sociable, and a leader among his friends from different nationalities,” she said. He did not study much but he was smart, she recalled, adding that much moving around affected his grades. The Soltan family first moved to Oman, then to the US, where they lived between Michigan, Ohio, Missouri, and Massachusetts.

Mohamed graduated from Ohio State University with a degree in Economics, after becoming head of the student union.

But the 27-year-old’s world was shortly to turn upside down.

“When I got cancer, [Mohamed] left his life in the US to be beside me,” his mother said, denying that his return to his homeland was to do with politics. Asmaa had returned to Egypt when her husband, prominent Muslim Brotherhood member Salah Soltan, gained a job in former President Mohamed Morsi’s government.

Mohamed arrived two months before the violent dispersal of the pro-Morsi sit-ins, taking a job in a petroleum company. Later, he was shot in the arm during the crackdown on Rabaa Al-Adaweya in August 2013, which left over 800 people dead, according to Human Rights Watch.

“He was defending what is right…although he had [opposed] Muslim Brotherhood policies,” said Asmaa, asserting that his appearance on foreign media was as a citizen, rather than an official. In one interview, Mohamed said: “…people are not necessarily pro-Morsi…[they] see the Brotherhood as having failed in the past year… approval ratings whether up or down doesn’t determine whether you break the  principles of democracy.”

A few days later, Mohamed and three of his friends who were at his house were arrested when security forces could not find his father.

“I had just arrived in the US when the news reached me,” Asmaa said. “I cried and prayed, but considered it a sacrifice…for the path of righteousness.”

Under psychological and physical torture, Mohamed turned to a hunger strike as a form of protest, which was met by refusal from his mother at first.

“But then I respected his wish, given that he has no other method to pressure against what he has been subjected to,” Asmaa noted.

“We are like God, we give orders, [Interior ministry officials] told Mohamed,” said the family’s spokesperson, Sara Mohamed.

According to Mohamed’s mother and the spokesperson, authorities refused to treat Mohamed’s wound, leading to its infection and worm colonisation. Coincidentally there was a doctor in his cell. He operated on him using a plastic spoon and water, with inmates sitting on Mohamed in the absence of an anaesthetic. “He cannot lift his hand till now,” Sara noted.

“Police officers are pushing him to commit suicide,” said Asmaa. She recalls security forces blindfolding Mohamed and taking him to an unknown place. When he asked, they told him: “We are taking you to die.”

He is in solitary confinement, not allowed to see sunlight, and is only allowed to go out of his cell for visits when there is nobody around, stated Asmaa.

Since his detainment, Mohamed has fallen into a coma at least three times, and has had at least two strokes, aside from his suffering from asthma.

The US and the case

In October, US President Barack Obama asked Egyptian President Abdel Fattah Al-Sisi to release Mohamed on bail on account of his deteriorating health. Another letter from the US embassy was handed to the court, which refused the interference of any country or party in a “purely judicial affair”.

Mohamed’s family, friends, and the US embassy called on the Ministry of Interior to allow Mohamed proper treatment based on doctors’ orders, which the ministry also refused.

“The US government is negligent. They say they cannot interfere in the [Egyptian] judiciary so long as the case is ongoing, but if they want something done they can do it,” added Asmaa.

However, Mohamed’s sister, Hanaa, has a different point of view.

“We have kept direct and open lines of communication with the officials directly involved in monitoring his case and have tried to increase awareness…to generate more support for the calls for his release,” she said.

She asserts that US officials are working hard to “navigate the disorganised and tumultuous system in Egypt”.  They recognise the troubling nature of Mohamed’s detention and are working to find a resolution to the issue, she added.

“While we would ideally like to see more done, we fully recognise the efforts put forth,” Hanaa said.

The verdict is two days away

Nowadays when the family visits him, Mohamed is the one giving them strength, his mother stated.

“I have faith that he will get out [of prison], and if not, it is God’s will, may He give Mohamed’s and our hearts’ strength,” Asmaa said.

Sending her son a message, Asmaa said: ” Now await in patience the command of thy Lord: for verily thou art in Our eyes.”