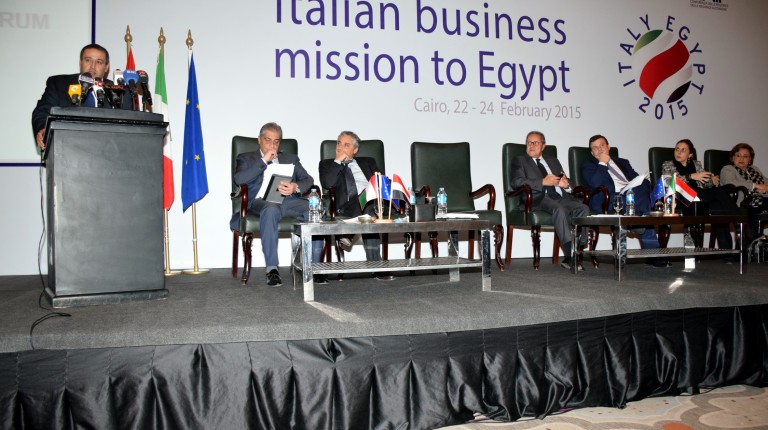 Egypt is keen on efficient Italian cooperation at the Economic Summit to be held in Sharm El-Sheikh next month, according to Ministry of Industry and Foreign Trade Mounir Fakhry Abdel Nour.

He added during the Italian-Egyptian Business Council in Cairo on Monday, which saw the participation of approximately 100 companies, that Italy is one of Egypt’s biggest trade partners. It is the biggest European partner and the third biggest trade partner worldwide, affirming that he has invited roughly 100 Italian companies participating in the council to attend the Economic Summit in March.

Abdel Nour said trade between the two countries amounted to £5bn, while Egypt’s exports to Italy witnessed an increase of 30% during the first half of 2014. The minister added that Italy’s investments in Egypt are rising to almost £2bn through a number of projects.

He confirmed that Egypt will offer all facilitations to Italy’s investors to start projects in different sectors.

Italian Ambassador to Cairo Maurizio Massari said he believes in Egypt’s economic future, and that Italy will be strongly present within the investment sector in Egypt in the upcoming period. Egypt is also taking a step to pave the way to pumping new investments.

On Monday, Investment Minister Ashraf Salman met with President Abdel Fattah Al-Sisi to discuss economic and investment reform in Egypt. He added that the Italian-Egyptian Business Council is a small example of the readiness for the Economic Summit in March.

He added that Egypt made financial reforms in the last period to assure financial and international communities and to regain the international markets’ trust. One of the reforms is to decrease the budget deficit to 8% of the GDP.