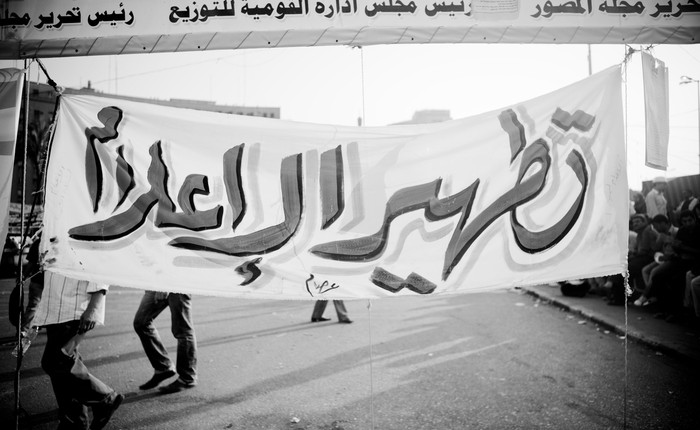 Belly dancers, police agents, and football players dominate Egypt’s fourth branch of government. With extremely politicised rhetoric, such figures steer and row the media to shape public opinion. Egyptian media is a portal into a land of turmoil.

A list of icons from the toppled president Hosni Mubarak’s regime, along with so-called “strategic experts” are imposed on the media, said Gamal Eid, executive director of the Arabic Network for Human Rights Information (ANHRI).

“These people are uninformed and are used to force public opinion into a predetermined path,” Eid claimed.

This has been common knowledge echoed in minds and coffee shops, but alleged leaks from the government released Monday confirmed many of these doubts.

“This is how I want things handled [in the media],” President Abdel Fattah Al-Sisi’s office head allegedly said, giving instructions to use “our” TV presenters. Ahmed Mousa, Wael Al-Ebrashy and Ibrahim Eisa were among those handpicked.

The television appeared in Egypt during Gamal Abdel Nasser’s era, where it was shaped into an outlet of showing off what the president and “Egypt” were doing, said Dalia Khattab, senior anchor of Nile TV International.

Since then, the importance of news is not based on an event, but rather on glorifying certain important people, Khattab stated. “This habit is difficult to change.” Putting the president first and years of an iron grip on media conduct resulted in a dysfunctional media, Khattab asserted.

With government media, we know that it presented the official position of the country. “The problem lies in private media where there is space for the host to express opinions,” Khattab believes.

“Capital interests meet the state’s interests, away from the interest of the citizen,” Eid said.

The state does not want media reform, Eid maintained. Thus, professionals are eliminated. “The fate of those [in the field] who do not support [the government] is banning or censorship.”

Professor of Political Sociology Said Sadek agrees. “Private media outlets have their own agenda, and with high competition it turns to sensationalism to sell.”

Religious figures, actors and other irrelevant guests are hosted to discuss and analyse matters of political importance on media channels, which neither differ in conduct nor content.

“One has to search for a long time to find a professional article, regardless of political affiliations [of the writer]” Eid said. Media has turned into a one-voice, one-opinion and one-word profession, he added.

Lack of professionalism has reached the point where media even manufactures tensions between Egypt and other countries.

“Qatar and its media continue to support terrorism… then want reconciliation [with Egypt], a devil’s dream of heaven!” said TV presenter Lamis Al-Hadidi. Only a few months later, the two countries partook in a Saudi-brokered reconciliation meeting in Cairo.

Intensive coverage and warnings were given to calls for mass protests last November, launched by the Islamist political organisation, the Salafi Front. People did not leave their homes, wary of the “terrorists”. However, very little clashing took place that day, and was mostly limited to the Cairo district of Matariya.

Agenda-setting of such topics are also used as a distraction from real issues, and serve political goals as well, Sadek said.  “They create topics which are not a priority and search for its solutions. Take atheism as an example. Who is it hurting [to warrant being covered intensively]? Religious extremism is the real problem which should be looked into,” Sadek said.

Media and news are contagious; what is covered by one outlet is imitated by others, explained Khattab. “What we took from the West is imitation, and we left out creativity. We even have shows with the same names and settings.”

Besides the material displayed, media is packed with raging and ranting. The language used is not short of hate speech, verbal assaults, and defamation of anyone with opinions opposing popular majority ones.

“There is a state of unprecedented media chaos,” Khattab said. Putting an umbrella such as that of terrorism results in a lack of professionalism, she said.

“Stage a mood which incites people,” Al-Sisi’s official had allegedly said in the leak to drive people to support the then-presidential candidate.

Eid said that the Egyptian media is full of misleading information and incitement. Khattab agreed, saying that the media is pushing people to take certain decisions and not giving them facts.

“All we hear about now in the media are calls to support the army, while Egypt has other problems to address,” Khattab said.

The people are polarised because of media. It “agitates” people’s emotions, Khattab said. “We have always had news coming in that military conscripts get killed on borders. Why is it put under the spotlight now, while concentrating on ‘terrorism’?” Khattab said.

The media  began to address other issues and ask people to work for their country after bringing them down mentally, socially and materially. They made people commit suicide and imposed depression, Khattab said.

“Whether professionals or not, everyone on the field should be punished. Most media personnel have to be brought to justice,” Khattab believes.

The media should inform, educate, entertain and guide people; it has a social responsibility, said Sadek. “Egyptian media does not play a role in spreading awareness.”

No repairing with an absence of guidelines

With no code of ethics, and minimal laws, the media is free to do as it pleases.

There are laws for media organisation in need of mending, Eid said. Instead, they are neglected further with each passing day. No action is taken against non-professionals.

Following the leaks, Eid said that according to the law, those involved cannot be charged with a criminal offense, but with political corruption. Yet, Eid said, the judiciary itself is biased to the regime and needs reform, so this is unlikely to happen.

“The leaks play into the false credibility of the regime, even to its supporters. The hope is in people’s awareness, which will take time,” Eid said.

The media will not be fixed anytime soon, Eid believes, owing to an absence of political will. “Everything begins and ends at the hands of President Abdel Fattah al-Sisi, and he wants media to move in his favour,” said Eid.

Media is like a knife, “you can’t dispose of it, but you can either cook with it, or kill with it,” Sadek asserted. Egyptian media is a failure, he said. “Every message serves political goals.”

“The society must be saved from this catastrophe,” Sadek said. He believes that repairing the media required intensified efforts: monitoring from the journalists’ syndicate, for example, and taking serious actions against those who commit violations.

Khattab believes that the media should reorganise itself, which is better than outside control.  “Again, media is contagious. If one entity starts, others will follow,” she said.

With social media and its activists constantly challenging traditional media, it has become difficult to control a whole nation, as the case had been previously. The question is: how far will the societal crack deepen before Egyptian media is put on the right track?