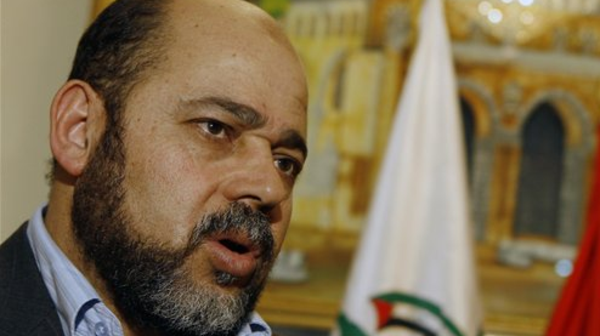 However, he added: “Should Israel continue its violations, then all options are open; we can deal with any situation that emerges.”

Abu Marzouk pointed out that Israel is violating everything that was agreed upon during the peace talks mediated by Egypt.

Ismail Haniyeh, Deputy Head of Hamas’ political bureau, further stated that the “Zionist escalation is a serious violation to the peace agreement”.

Haniyeh called on Egypt, as a sponsor of the ceasefire agreement, to take action to stop the violations of the occupation.

The comments came following two airstrikes launched by the Israel Defense Forces in the Southern Gaza Strip, in response to a rocket attack from Gaza on South Israel.

According to the spokesman of Israeli Prime Minister Benjamin Netanyahu, Ofir Gendelman, the Israel Air Force ” hit and destroyed a Hamas target in Southern Gaza” in response to the rocket fire on Southern Israel Friday.

Deputy Minister of Information for the Palestinian Authority Mahmoud Khalifa noted there no causalities on both sides. Khalifa also said that the Israeli forces hit a number of facilities, including a factory, and have targeted empty sites in the city of Khan Younis in Gaza. He added that “Israel aims to re-escalate the situation in the Palestinian territories”.

The airstrikes were the first since the Egyptian brokered peace truce on 27 August. An open-ended ceasefire was reached after a 50-day attack on the Gaza strip that left nearly 2,000 Palestinians and 72 Israelis dead during ‘Operation Protective Edge’. The 50-day long conflict has left infrastructure in the Gaza Strip badly damaged.

Accordingly, Egypt co-hosted with Norway the “Reconstruction of Gaza” conference in October, where several countries, including the US, pledged funds towards the reconstruction of the strip. During the conference, President Abdel Fattah Al-Sisi noted that “it’s time to end the conflict”.

Peace talks between Palestinians and Israelis were set to be resumed in October, but have however been postponed indefinitely.

Tensions have been high in recent months, particularly in Jerusalem, which has witnessed repeated clashes between Palestinian protestors and Israeli security forces.

According to the Palestinian Embassy in Egypt, “tension” is prevailing in Jerusalem after provocative incursions were carried out by Israelis in Al-Aqsa Mosque.

Palestinian Authority Chief Negotiator Saeb Erakat held meetings Saturday with high-profile Egyptian Officials, including Foreign Minister Sameh Shoukry and Secretary General of the Arab League Nabil El-Araby. Discussions included the developments of the situation in the Palestinian territories and the Arab-backed Statehood bid presented to the UN Security Council that aims to put a timeframe to end the Israeli occupation and recognise the Statehood of Palestine, with East Jerusalem as its capital.

Palestinian statehood has been voted upon by a number of European parliaments, including the British, French, Spanish and Swedish parliaments, all of whom were in favor of recognising Palestine as a state.

Haniyeh in Cairo for Gaza blockade, relations with Fatah talks