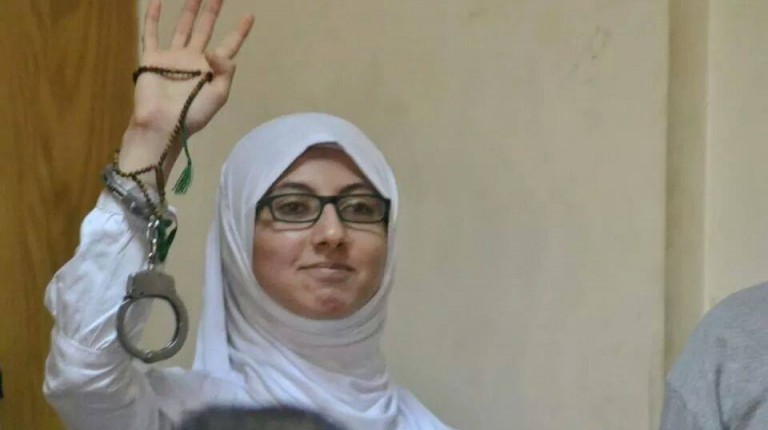 The Cairo Criminal Court decided on Wednesday that Karima El-Serify, 21, detained in Qanater prison since last April, is to be released under what they call “probationary measures.”

El-Serify has been on hunger-strike for over 68 days before the Court’s decision, with El-Serify yet to be released from Qanater prison.

While much of the media is reporting that El-Serify has been released, her  friends and lawyers say, however, that the Court decision does not mean she is completely released. Instead, the Court decided that she is to be released on the condition that she is detained at the police station every day from 9:00 am to 5 pm.

A close friend of El-Serify said “this is not really a release”, adding that El-Serify’s hunger strike was causing the prison administration and the ministry of interior “disturbances”.

“This may be a way to get her to end her hunger-strike, but at the same time keep her detained and under their supervision,” El-Serify’s friend said.

El-Serify’s mother previously said during a conference in solidarity with hunger-strikers at the Hisham Mubarak Law Center that El-Serify’s arrest was to put pressure on her father. Ayman Al-Serify was a close associate of former President Mohamed Morsy, and had previously worked in his presidential team.

El-Serify’s hunger strike came after prison guards ordered cellmates to beat her and her colleagues and steal their belongings, said her mother at the solidarity conference on 20 June.

Security forces kidnapped El-Serify from her home in mid-April, leaving her family unaware of her whereabouts for three days until she was taken to Qanater prison. She was charged in espionage cases along with members of the previous presidential team which then defence minister Abdel Fattah Al-Sisi overthrew in July 2013.

An increasing number of prisoners in the country have recently been using hunger strikes as a protest tactic in their detentions.