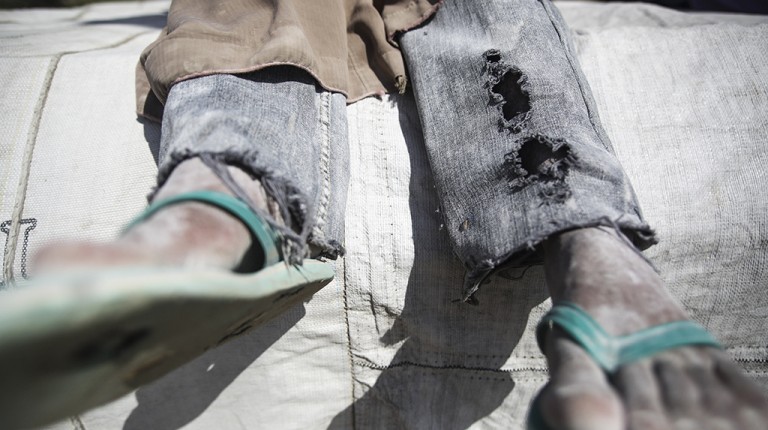 It’s been 30 years since artist Kadim Al-Sahir released his first album “The Olive Tree”, but the artist, since branded the “Caesar of Arabic Song”, remains unrivalled. Daily News Egypt met Al-Sahir at his residence in Morocco to get the latest.

Let’s start by asking about Sana, your granddaughter: has she started to listen to your music?

I’m crazy about my granddaughter. When Wisam [Al-Sahir’s son] puts on a song of mine she says “Dadu” [grandpa]. She’s begun to recognise my voice and is a new fan. That’s a beautiful and wonderful feeling.

She lives in the United States with my son. When I travel there I truly spend the most beautiful days of my life. Distance is a really difficult thing, however. Wisam’s in America and Omar is in Qatar. The thing that reassures me is that they are stable and successful in their lives.

What do you sing to her?

I always sing to her, but the first thing I ever sang to her was from the song “Law lam takouni fi hayati” [“If you weren’t part of my life”].

Do you dream of going back to Iraq and singing there?

I began [singing] in Iraq and my personality is rooted with my grandparents and in my country. I learned how to take peaceful steps there. I lived in a very simple and poor village that was nevertheless full of pride for its own culture and riches. Each neighbour would raise the other’s son. So if I did something bad, my neighbour would tell my father.

We had a tour set up for Baghdad and the concerts were sponsored by UNICEF to benefit children in Iraq. I was supposed to go out to Basra, Mosul and Erbil, but unfortunately bombings occurred at the time, which claimed the lives of ordinary people. So we postponed the tour out of fear for the people. I want to visit Iraq and sing there but there should at least be safety first. The people of Iraq have and continue to suffer. It would be a shame if I went to Iraq just to sing – I need to work on a big project as an ambassador for UNICEF. And we have started planning on building hospitals and schools in remote villages. God willing, things will be better soon.

Don’t you think that artists who are UN ambassadors are ineffective in delivering their message?

I agree with what you’ve said, but I for example asked to go to areas in the south [of Iraq] but the UN refused my request given that they have to protect me. We ask to do things but at times we are refused them. I agree with you in that we are incapable, but when we contribute, thankfully, real things are achieved on the ground.

Egypt is now entering a new era. Are you preparing a new song for Egypt, on returning there to connect with your Egyptian fans again?

I have been in contact with friends to help me prepare a song on behalf of Egypt and asked the poet Karim Al-Iraqi to write something, so that I can try in any way possible to be with the good people of Egypt, with whom I lived for many years. I still have a home there. Hopefully we’ll have a great song and concert worthy of them.

Where will the concert be?

The invitation was for me to sing at the Opera House, which I have no objection to, but I would hope to have a big concert in the stadium so that even more people can attend.

How was your childhood in Iraq? How was your art shaped by the suffering you endured in your life?

Whatever was suffered in childhood didn’t feel like suffering in the arms of our father and mother. I felt true suffering when my mother died. We tried to help out our parents when we were young, and we put our will behind it. We worked and took responsibility in helping our mother. We were a family of 12 living in a house that was 60 square meters big and divided into two rooms. I definitely think this poverty would make you want to go out and try to do anything else.

All of this contributed to the formation of my character. I love responsibility and relying on myself. I love a challenge, too. God gave me this talent – the talent for writing poetry and composing music. He gave me a voice and the ability to study it academically and learn from that. I think everything that’s happened to me, as well as the depth of [culture and tradition] in Iraq, is what have built my personality.

You have stated that you chose the hard road – what if people hadn’t accepted it?

I am stubborn about my art. I’d say “I’ll go do something else” if the people didn’t like my style. I need art; it awakens my emotions and affects me as person. I am a simple man but a difficult artist – I don’t take the easy way out when it comes to music.

We’ve noticed that after being in The Voice, your personality seems to have changed – you smile more, you’re more receptive to the press, you’re social, and you tell jokes. What happened?

It’s true. I am really fond of poetry and music, spending hours daily in search of a new melody or poem. The poems I present to the audience are not that easy, and the audience can be hard on you, judging what you present and what you say. But The Voice broke my barrier of isolation and made me more social with people.

Now, I’ve started to take my car and go to working-class neighbourhoods, meeting and sitting with people in restaurants. I’ve started to enjoy myself more than you can imagine. If there’s one thing I’ve learned, it’s that if something scares or hurts me inside, I must face it. Thank God I learned this before it was too late.

What do you think of those who doubt the credibility of these types of programmes? And why do contestants of Arab Idol gain more fame than those of The Voice?

Credibility does exist in all of these programmes and is in the interest of the participants, not the judges. All of these efforts are made so that we can produce stars who will be able to compete in the arena.

When MBC sponsors an artist, it stays with the artist. But I think The Voice is owned by a different company. Whoever is an MBC artist is very lucky. I’ve tried to bring whoever has sang with me [in the show] to sing with me at concerts and festivals in the Arab world. But the problem is that they’re followed by more than 100m people until they leave the spotlight and the fame, when suddenly no one follows them at all.

We used to wait for months for radio and television to give permission to record our songs; we used to wait a lot for opportunities, before. But now that these young people have a chance, they should use it to the fullest extent possible.

Sherine surprised you on air when she said “I want a baby from you,” on Mother’s Day. What did you make of this strange joke?

Sherine is one of the best people I have met. She’s kind, simple, and spontaneous; she doesn’t think about what she’s going to say. Sometimes a person does not think about what he says when he’s amongst people. So I laughed at her joke, because it was just a joke.

What are other types of art you hope to practice?

I love visual art. My father was a carpenter, so I used to take a brush and paint [in my childhood]. These days I’ve started to learn painting professionally. My house is full of paintings influenced by the visual artists from Iraq. I know other artists too, but painting is my hobby. I think that my paintings are just scribbles; nothing more.

Have you worked on a piece similar to the work of Hussein Al Jasmi?

I’ve had the pleasure of sitting with him. I have a song I’ll present to him, and if he likes it we’ll sing it together.

Recently, music has been influenced by new ideas, and songs are no longer about romance. Do you think that these new ideas, propagated by the youth, are going to take the romantic aspect out of Arabic songs completely?

You will find different schools in the world of art. Some people prefer to go to the Opera while others prefer more popular, folk songs. Then there are ballads which tell stories. They adapt popular vocabulary. All forms will continue to exist without covering up others. So when young people sing about their problems they help their audiences understand them, while also sending an important message.

Is there a message you’d like to send to the president?

I just wish love and peace for our Arab nation. The Arab people are good and amazing who have suffered under the scourge of war. We do not just know the meaning of war; we know that the price of war is paid by innocents and ordinary people only. I hope for love and peace for Egypt and that Egyptians gather as one family around the president they elected. I hope that they gather around one goal only, and that is the nation itself.