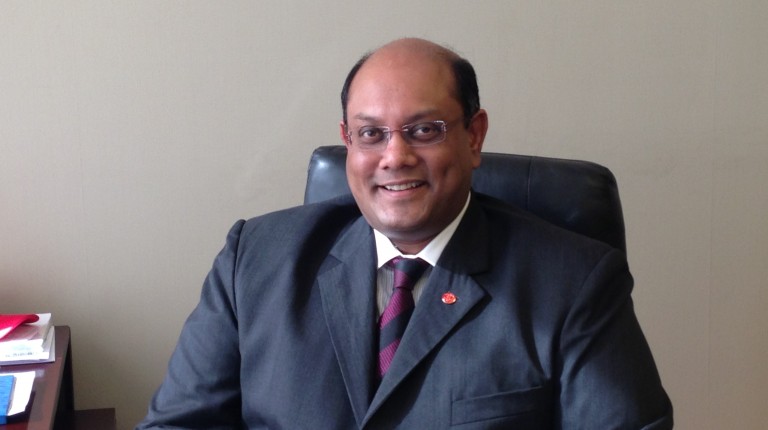 With a growing reliance on e-payments worldwide, Egypt still struggles with a low credit card penetration. The Daily News Egypt sat down with Head of Retail Banking and Wealth Management at HSBC Ranjan Sen, to discuss the future of credit card usage in Egypt. Also on the table was the reason behind the low penetration in the country and the bank’s future plans for the credit cards service.

We don’t focus on the exclusion of any market segment but there are obviously focus market segments. Our objective is to provide a service which meets the requirements of customers so that most important thing for us is to understand what the customer is trying to do with the [credit card] service. That itself breaks it down into different segments because younger people would require different kind of services to older people, and people who are internally mobile would require different kind of services. That is how it is broken up, by customer usage.

In terms of income, it’s across the range. For all of our customer base, we’re able to offer a product. Within the normal accounts we have segmentation, but the cards don’t follow that segmentation. We have cards across all segments and that’s very important to understand because a card is unlike a bank account, which gives you specific privileges and all of that. A card is a facilitation; it’s a transaction mechanism. What we do is facilitate the transactions for all our customers based on their needs. Our approach to segmentation is really customer-centric.

Like other banks, does HSBC bank have the classic, gold and platinum card classification in credit cards?

We have a classic, gold and platinum products, but we also have an advanced product and a premiere product. Again, all of these have overlapping requirements because we have some for Visa and some for MasterCard. And we have some things which are uniquely HSBC’s. For example, all our cards have triple access, which is something unique to HSBC. In other words, you [a client] can use it at a point of sale (POS), you can use it in an automatic teller machine (ATM) and in the ATM you can either access your card account or you can access your bank account.

Can you disclose the credit card marker share that HSBC has?

When you look at credit cards, you look at the number of cards but more importantly as I said the card as a payment facilitation so you also look at how much it has been used and what is being spent through the card. You have a large number of credit cards that no one uses and a smaller number of cards which have high usage. Now we are in a position where we’re leading on both. In terms of spend we are number one in the market. We have a huge share of the “spend” of credit cards in this country and on the number of cards, our market share is in double digits, which is a strong statement. It has continued to grow in strong double digits year-on-year over the last three year in a market which has been somewhat flat.

In other words, we have been taking market share over the last three years. If you want to know in terms of penetration in our own customer base, I would say almost 80% of all eligible customers in our database have cards, and that is almost half of our total [eligible and ineligible] customers.

Is there a target in increasing the number of credit cards?

No, the sky is the limit. Our growth is much faster than the market, which is really flat. Our growth will be facilitated if the market grows faster. But there is no limit to what we want to do in Egypt, which is one of our 20 priority countries. We are very focused on short-term, medium-term and long-term and cards are something which fulfills all those opportunities.

But you definitely see an opportunity for growth in Egypt?

We see a huge opportunity for growth. Because the credit card penetration in the population is very low right now.

Why is the penetration low though?

I won’t presume to be an expert on Egypt but I will say in general what the HSBC experience is across nations. Penetration is driven fundamentally by three facts. Number one is by the spread of the acquirers. So the POS machines in Egypt are still in the margin of 40,000 machines. A country of this size should be in several hundreds of thousands. So until it is widely accepted, people won’t start carrying a card.

The second major issue is that in most emerging countries, people feel that if you pay through a bank or through a card, the tax authorities will start to understand how much money you’re making. So a lot people prefer not to do it through the card and this is again not specific to Egypt. In very many third world countries, the tax authorities focus on two things which are very visible. The first is the purchase of airline tickets and the second is the card’s spending.

The third is that the value of a lot of things is not stated on invoices, and that is really from the merchant’s side. In most of Asia and Latin America, you’ll find that things are not fully invoiced. So you have to carry some cash and if you’re carrying some cash, you might as well pay all in cash.

Several studies showed that e-payment can help with the growth levels of the gross domestic project (GDP). Do you agree?

GDP is a function of money. This means that as money circulation goes up and grows, so does your money supply. In terms of e-commerce, it is essential for an economy now to adopt e-ecommerce, not just for citizens within the country but for cross border. This can only help growth. Does it help growth immediately? It depends on the industry where it is going to. If you’re paying school fees through e-channels, I am not sure if this helps growth but it helps convince, speed and efficiency. On the other hand, if you’re buying stuff on the internet and paying for it and those get delivered and there is an underline trade, of course it will help.

In Egypt, there is a tremendous potential for it and I think the government is all set to encourage it.

What is the value owed to the bank by the credit card clients, the spend value as you defined?

How much are the conditions to obtain a credit card in HSBC Egypt are in line and complying with the international standards of HSBC?

I would say that the conditions that we have, not just for HSBC but for all of the banks in the market, are pretty much close to international levels. So we impose the same conditions here as we do worldwide. It is completely compliant with local regulations. In fact, Egypt has an advantage which is not seen anywhere else in the Middle East and North Africa (MENA). Egypt has its own credit bureau, and it makes the market much more sophisticated than you have in Bahrain, Qatar, Omar or any other gulf country.

Are there any new services the bank is offering with regards to the credit card services?

There are two sets of things.  There are offers on credit cards and then there are fundamental underlining services. Among what we have is the service of offering loans on cards, it’s called easy cash.  You can use your card to start an installment loan. You don’t need a separate application process or to go to the bank.  We also have the entire banking module, the application offered on SmartPhones.

There are other things that we’ll be offering in our fundamental service. Your PIN, which is something normally very frustrating because it gets delivered by the bank to you and it’s a pre-set number that can’t be change. What most people need is a PIN which will align with the rest of their PINs. We offer a PIN over IDR, so the card comes to you, it gives you a number and the card is not active. You call that number and someone at the other end does a verifying quiz and then they automate your access to set your own pin.

Can you explain the easy cash service a bit more?

There are series of offers which are very verbal on our website so if you want to go and buy something from a particular merchant, then all you have to do is make a phone call. When you buy that item, it doesn’t become part of your payment schedule of the card. It becomes a loan automatically at its own interest rate and its own payment schedule. It allows you the flexibility of continuing with your card usage and having a separate loan.

And this service has been available since when exactly?

It was very recently launched.

Do you expect it to be successful?

We’ve had early success. What we are hoping to do is go big with a campaign on it as soon as possible.