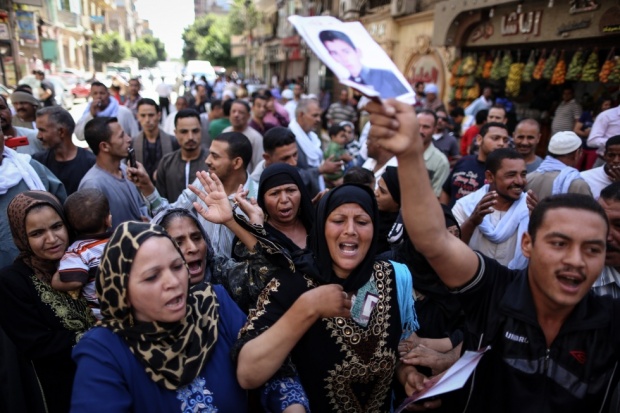 Various rights groups condemned Saturday a Minya judge’s sentencing of 183 alleged Muslim Brotherhood members to death sentences, calling the trial a “travesty of justice” and a “bid to crush dissent”.

“In recent months, Egyptian courts appear to have handed out death sentences at the drop of a hat, including in two mass trials based on flimsy evidence and deeply flawed proceedings,” said Hassiba Hadj Sahraoui, Deputy Director for the Middle East and North Africa at Amnesty International (AI).

Human Rights Watch (HRW) and the British Foreign Secretary were also quick to condemn Saturday’s ruling, calling the case a “travesty of justice” and warning that “these sentences damage the reputation of Egypt’s judicial system and undermine international confidence in the prospects for political stability in Egypt.”

Judge Said Youssef, who gave preliminary death sentences for 528, then later 683 alleged members of the outlawed Muslim Brotherhood movement, affirmed during Saturday’s court session that 183 of the 683 should be given the death penalty.

William Hague, the British Foreign Secretary urged “Egyptian authorities to review these sentences and to ensure that human and legal rights are fully upheld in this case, and in the country as a whole”, adding that, “the UK opposes death sentences of any kind”.

AI noted that, “The verdicts in this case provide the latest example of the Egyptian judiciary’s bid to crush dissent. The Egyptian authorities must quash these sentences and order a fair retrial for all the defendants without recourse to the death penalty,” Sahraoui said.

The sentences came under particular criticism because the defendants were all tried in absentia. The original hearing of the case was also decided with the defendants in absentia, leading AI to call the 25 March hearing “grossly unfair”.

Human Rights Watch acknowledged the case was “in clear violation of Egyptian and international law”, citing Article 96 of the recently-ratified Constitution which states that all those accused of a crime are “presumed innocent until proven guilty in a fair legal trial in which the right to defend oneself is guaranteed.”

The HRW report went on to point out that, “The United Nations Human Rights Committee, the international  body that interprets the International Covenant on Civil and Political Rights (ICCPR), to which Egypt is a state party, has said that ‘in cases of trials leading to the imposition of the death penalty, scrupulous respect of the guarantees of fair trial is particularly important’”.

This case, HRW, notes, was lacking of proper attention in the severity of the verdicts. The punishments are deadly serious, but the trials weren’t,” said Joe Stork, deputy Middle East and North Africa director at HRW. “Condemning 183 rather than 683 people to die after a cursory and one-sided trial is still a travesty of justice.”

The accused are still able to appeal the verdict, as Egyptian law stipulates that those tried in absentia are eligible for retrial.

“Only 74 defendants were present for the Adwa trial’s single hearing on March 25,” the HRW statement read. “None were present for the sentencing on April 28 and June 21. The charges included murder,  the attempted murder of five people– including a local Christian man, threatening public order, and burning the Adwa police station.”