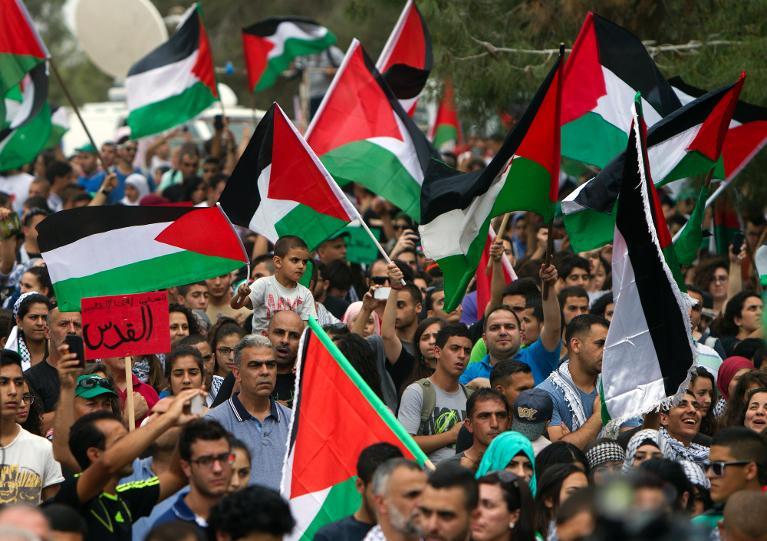 Israeli Foreign Minister Avigdor Lieberman on Wednesday denounced as a “fifth column” thousands of Arab Israelis who joined a demonstration calling for the right of return for Palestinian refugees.

Around 10,000 protesters, many waving Palestinian flags, joined a rally in northern Israel on Tuesday to remember 530 villages from which some 760,000 people fled or were expelled following the creation of the Jewish state in 1948.

The rally took place as Israel marked its 66th Independence Day, with Lieberman accusing the demonstrators of being traitors.

“Those who marched with flags of the Palestinian Authority demanding that it not give up on the right of return, are a fifth column whose aim is the destruction of Israel,” he told army radio.

He also addressed the demonstration on his Facebook page on Tuesday.

“To those Arabs that took part today in the ‘Nakba Day’ procession and waved Palestinian flags, I suggest that next time they march directly to Ramallah and they stay there,” he wrote.

But he acknowledged that those who joined the Nakba demonstration were only “a minority” among Israel’s Arab minority, who make up just over a fifth of the overall population of 8.2 million.

At the rally, which took place in a small village in northern Israel, the protester marched under the slogan: “Your ‘independence’ day is our Nakba” – the Arabic for catastrophe.

More than 760,000 Palestinians fled or were driven out of their homes when Israel came into being in May 1948. Today, with their descendants, they number an estimated 4.8 million.

Around 160,000 Palestinians stayed behind and took citizenship in the newly-established state, becoming known as Arab Israelis. Official figures published last week show they now number 1,694,000 people, or 20.7% of the population.

Lieberman, a hardliner within the ruling rightwing coalition, is an open proponent of the controversial concept of “transfer” – transferring densely-populated Arab Israeli areas to the control of the Ramallah-based Palestinian Authority in any future peace deal.