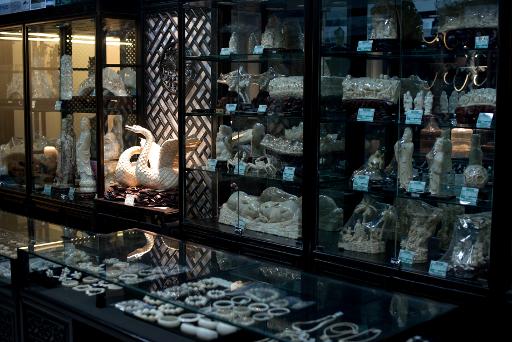 Kenyan and Tanzanian ports are the “primary gateway” for ivory smuggled to Asia, where demand is fuelled by increasingly affluent markets, especially in China, the United Nations Office on Drugs and Crime (UNODC) warns.

“Large-scale ivory shipments – each one representing the slaughter of hundreds of elephants – point to the involvement of organised crime networks operating across multiple countries,” Interpol said.

Poaching has risen sharply across Africa in recent years.

Organised gangs with insider knowledge and armed with automatic weapons and specialised equipment such as night vision goggles, brazenly use chainsaws to carve out the rhino horn or remove elephant tusks.

Veteran Kenyan conservationist Richard Leakey has now warned that drastic action must be taken, saying that known ring-leaders in Kenya are operating with “outrageous impunity”.

The rise in poaching, with animals being slaughtered inside even the most heavily guarded national parks or conservation areas, show that the poachers have little fear of tough new laws designed to stem the wave of killings, he said.

“They could not operate with the impunity we are seeing if you did not have some form of protection from law enforcement agencies,” Leakey said, as he made an appeal for Kenyan President Uhuru Kenyatta to take action.

“It is a problem of a few criminals… the ringleaders are known,” he added, claiming that a core group of around 20 to 30 people were organising the mass poaching but that none had faced justice.

But such short-term and finite profits generated by the spate of killings are threatening the far more valuable tourism industry, which in Kenya and Tanzania is the second largest foreign exchange earner after agriculture.

“The African elephant is not currently deemed ‘endangered’ as a species, but its decimation in Eastern Africa could be devastating,” UNODC’s report read.

“In addition to the reduction in genetic diversity, its loss could seriously undermine local tourist revenues, a key source of foreign exchange for many of the countries of the region.”

The two nations made up almost two-thirds of all large shipments of ivory seized across the entire continent from 2009-2011, according to the Elephant Trade Information System (ETIS), a tracking database run by wildlife trade monitoring network TRAFFIC.

Seizures of containers crammed full of tusks – often hidden under foul-smelling fish or dried chili peppers in a bid to confuse sniffer dogs or discourage detailed searches – are regularly found.

Much of the ivory smuggled is destined for China, whose rapidly growing economy has encouraged those enjoying disposable income to splash out on an ivory trinket as a sign of financial success.

“Growing affluence in China, where possession of elephant ivory remains a status symbol, appears to have rendered China the world’s leading destination for illicit ivory,” the UNODC report added.

The smuggling of rhino horns is a bigger problem for Southern Africa, which has far more of the endangered animals. It is often done by air, due to the value of the horn and its smaller size.

But scores of East African rhinos are also being killed despite wildlife rangers often risking their lives to protect them.

Action is being taken including far stiffer sentences for wildlife crime, with Tanzania this month jailing a Chinese ivory smuggler to 20 years in jail, and Kenya introducing tough new laws with comparable penalties.

But many escape justice: a recent study by the Kenyan conservation campaign group Wildlife Direct found that just 4% of those convicted of wildlife crime in the past spent time in jail.

Tanzania last year launched a crackdown on suspected poachers, operating under what was reported to be a shoot-to-kill policy and making sweeping arrests.

Leakey, 69, a Kenyan national and former head of the government’s Kenya Wildlife Service (KWS), said with the “right management” stemming the poaching was “not an impossible” task.

He was key in stemming the rampant poaching of the late 1980s, bringing in extreme measures to combat poachers including sending helicopter gunships into national parks, and organising the iconic burning of stockpiled ivory.

“It is not valuable, it is tragic rubbish,” Leakey said, waving an ivory carving seized from a smuggler, the tiny tusk of a baby elephant.

“It is putting at risk our heritage… you can regrow a crop but you cannot regrow a wildlife species that disappears.”