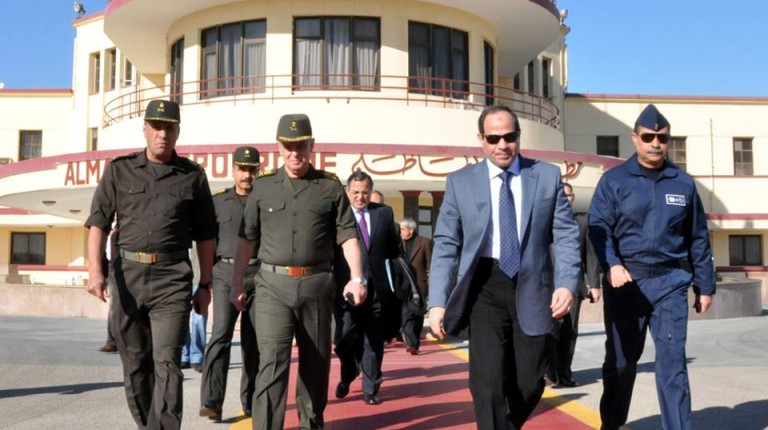 Minister of Defence Abdel Fattah Al-Sisi and Minister of Foreign Affairs Nabil Fahmy travelled to Moscow on Wednesday to meet with their Russian counterparts. It is the second time the four ministers have met to discuss the strengthening of a strategic partnership.

Fahmy will meet with Sergei Lavrov and Al-Sisi with Sergey Shoigu in separate meetings before coming together for a four-way meeting, described by the armed forces spokesman as a 2+2 format.

Official spokesman for the Ministry of Foreign Affairs Badr Abdelatty said: “This meeting is a follow-up meeting of the quadrilateral meeting from 14 November 2013.” He added that the aim of the meeting is that of “deepening relations”. The spokesmen said they will discuss cooperation on a variety of issues including, “military, security, economy, trade and infrastructure”. They will also touch on regional and international issues of mutual interest as well as non-proliferation of weapons of mass destruction and nuclear energy.

In response to a direct question regarding the possibility of a weapons deal, Abdelatty said: “Military cooperation will be one of the major issues to be discussed” adding, “I do not know if any deal will be signed or not.” He referred the question to the armed forces spokesman, who could not be reached for comment.

The visit of the Russian ministers to Egypt last November came soon after the United States decided to cut military aid to Egypt. Fahmy strongly denied that Egypt was looking to replace the US with Russia and Abdelatty also denied the existence of a weapons deal between the two sides. The US Department of State said at the time that it was focused on its own relationship with Egypt.

Lavrov said soon after the meeting in November that Russia is willing to invest in Egyptian nuclear energy.