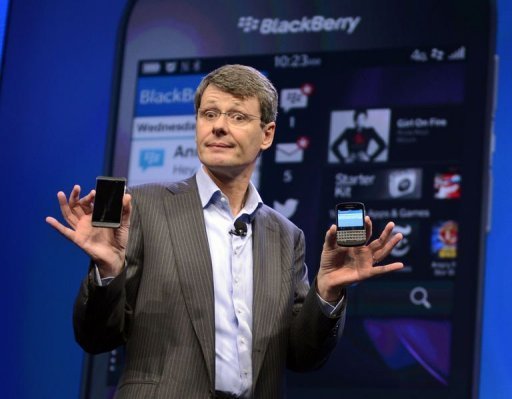 AFP – Canadian tech pioneer BlackBerry, which earlier this week agreed to a $4.7 billion buyout, said Friday that it lost $965 million in the second quarter.

The Ontario-based company, formerly a leader in mobile phone technology, has been squeezed by rivals Android and Apple, steadily losing market share, a trend which continues according to its latest earnings report.

“We are very disappointed with our operational and financial results this quarter and have announced a series of major changes to address the competitive hardware environment and our cost structure,” said BlackBerry CEO and President Thorsten Heins.

He added that the company is putting in place “the necessary changes to create the best business model” for its ailing product.

“We understand how some of the activities we are going through create uncertainty, but we remain a financially strong company with $2.6 billion in cash and no debt,” Heins said.

“We are focused on our targeted markets, and are committed to completing our transition quickly in order to establish a more focused and efficient company.”

BlackBerry announced this week that it signed a letter of intent with a group led by Fairfax Financial Holdings Limited, which has offered to acquire the company.

Fairfax, a Canadian firm headed by billionaire Prem Watsa, is already BlackBerry’s largest shareholder with approximately 10 percent of its shares.

Watsa resigned from BlackBerry’s board in August when it announced a search for a suitor.

Under the proposed BlackBerry-Fairfax deal the consortium would offer $9 for each outstanding share, and Fairfax would contribute its own shares in the transaction.

BlackBerry said its board supports the plan.

A firm deal, once due diligence is completed, is expected by November 4. It also hinges on the consortium obtaining financing.