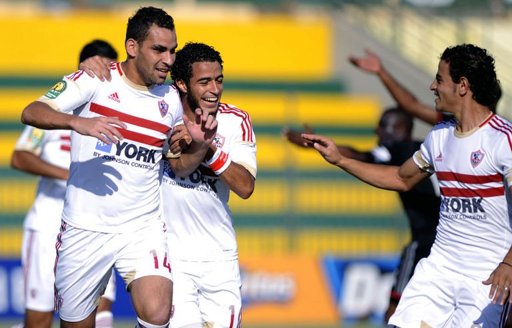 Egyptian clubs were victorious during the fourth round of the first group in the quarter final group stages of the African champion’s league this week.

The games were played in the stadium of the popular Red Sea resort Al-Gouna after the Ministry of Interior banned football matches from being held in the Egyptian capital, citing security concerns.

Al Ahly clinched their 3 points on 30 August, beating Congo’s AC Léopards 2-1 in a difficult win. The game was delayed for 26 minutes after clashes occurred between Al-Ahly supporters among themselves before security forces cleared up the stands. A limited amount of supporters were present during the start of the game.

The game took off to a slow start but Mohamed Abo Treka soon raised pulses after a one on one chance with the Leopard keeper, only to confusingly pass it across. Abdallah al Saeed scored the first goal of the game 38 minutes in, from a strong strike which slipped from the keeper’s hands.  Leopard’s keeper, Nogomi, was helpless with Waleed Soliman’s curved shot from the edge of the 16 yard box, doubling Ahly’s score. Sidoine Beaullia scored the Leopards’ only goal in the 84th minute, which might have been vital had Sherif Ekramy not saved a penalty in the 40th minute.  The match ended 2-1 to Ahly.

The win lifts Al-Ahly to 7 points on the table, tying with South Africa’s Orlando Pirates but remaining in second place due to a plus five goal difference.

3,000 attended the Zamalek match at Al-Gouna stadium Sunday to watch their win over Orlanda. Al Zamalek was thrashed during their away leg in South Africa 4-1 making the return leg a tough fixture.

The game started with a warning shot from midfielder Nour Al Sayed, which grazed by the post. The tie didn’t last long after Shikabala was tackled inside the box to be awarded a penalty. It was converted by Ahmad Eid in the 6th minute, who drove his shot down the middle of the goal to open up the score sheet.

In the 33rd minute Pirates’ striker Lenox Basela fooled Zamalek keeper Abdelwahed with a low shot, tying the game at 1-1.

Zamalek defender Salah Soliman guided his header well proved worthy for a second goal and an anxious win for Zamalek. The White Knights beat the Pirates 2-1.

Although still remaining at the bottom of the table with 4 points, the win lifts Zamalek’s chances to advance to the semifinals. Zamalek is tied with the third place Leopards, however their table ranking is lower due to higher goals being scored by the Leopards over the past four rounds.

Two more rounds remain for the Egyptian teams in the table. The next round sees both teams face-off in an important match at Borg Al Arab stadium near Alexandria, which could decide who continues to the semi-finals of the Champions League. Al Ahly’s 6th round match will be an away leg in South Africa against the Pirates, while Al Zamalek’s will be against the Leopards in Egypt.