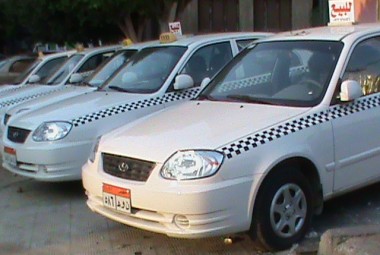 A recent report released by the Ministry of Finance stated that the financial burden on the country’s treasury due to funding the taxi exchange programme has exceeded EGP1bn, reported state-run MENA.

This burden matches the cost of financial benefits provided to those 41,000 taxi cab owners who seek to take part in the first and second stages of the programme.

The report, received by Finance Minister Ahmed Galal, stated that taxi owners stand to gain upward of EGP 8,300 on average for repayment of sales taxes paid on high speed vehicles owned by the ministry.

Imported car parts would be exempted from taxes and customs duties paid on them by an average of EGP 1,000 per car. Monthly payment instalments on bank loans would also be decreased to EGP 550, in exchange for the right to advertise on the new taxis.

The report stated that the ministry put forth the largest portion of the aid, due to the reluctance of advertising companies to announce the release of such large numbers of taxis considering the country’s poor economic circumstances.

The report further stated that the ministry intervened twice to support white taxi cab drivers since the outbreak of the January 25th revolution: firstly, when payment of premiums on taxis was postponed three months during 2011. The second instance occurred in January, February, and March 2012, when payment on premiums was postponed once again, costing both the treasury and banks EGP 36m and EGP 4m respectively.

The most serious complaint received by the ministry from taxi drivers was the idea that cab drivers would be forced in to the programme, which the ministry denied, stating that any such decision would be voluntary.

The country’s new traffic law provides owners of vehicles more than 20 years old with three ways to abide by the programme’s provisions: the first being to sell the vehicle to another individual who would become its licensed owner and subsequently hold onto its permit. The second method allows owners to buy a used vehicle at the same sales price of their old vehicle, on the condition that it is not more than five years old. The third method would be to conduct an exchange programme between taxi drivers for those whose vehicles do not exceed more than 20 years in age.

The report denied claims of price inflation for new cars being sold in the programme, adding that prices for cars taking part in the programme had not changed since 2009 despite changes in the dollar exchange rate.

The ministry has also begun to address complaints regarding burdens being placed on the production of various types of cars and vehicles. Both the Ministries of Finance and Industry and Foreign Trade have proposed forming a joint committee to address these complaints, along with those received in the future, in an attempt to reach solutions that would satisfy cab drivers.

The report said the ministry would move to compensate all those whose vehicles were stolen or exposed to total depreciation from January 2012 to 30 June 2012, providing them with new vehicles.

The report further stated that the programme would help improve the income of over 41,000 families, which would help stimulate the country’s car production sector and feeder industries.

Cab owners who do not qualify to have their vehicles exchanged have engaged in a series of protests as of late to take part in the programme.