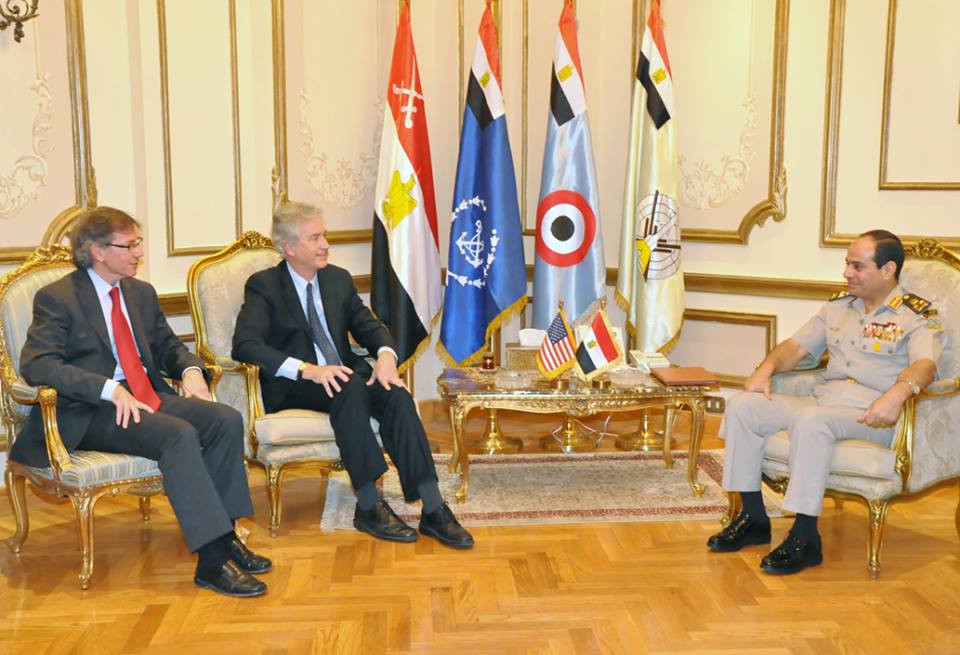 US Deputy Secretary of State William Burns extended his visit for one day to meet Prime Minister Hazem El-Beblawi and Defence Minister General Abdel Fatah Al-Sisi, in his continued talks to end violence and to start a peaceful and inclusive political process, according to state-owned news agency MENA.

The armed forces spokesman issued a statement on his Facebook page, saying the meeting between Al-Sisi and Burns was about sharing opinions about the political situation and its effect on Egypt’s democratic transition.

They discussed ways of reducing violence, increasing stability and paving the way for inclusive national reconciliation, within the roadmap set for the transitional phase.

The spokesman said General Sedki Sobhi, Chief of Staff of the Armed Forces, and US Ambassador Anne Patterson also attended the meeting.

Burns briefed El-Beblawi on the results of his meetings with several political fronts and emphasized that the people are the ones who must decide their future and that the US only aims to bring all the views closer, the statement read.

El-Beblawi assured Burns that the government is progressing in its execution of the roadmap during the transitional period and the peaceful political environment can accommodate every political front without exclusion.

El-Beblawi also briefed Burns on the economic situation, and Burns declared that the US welcomes the resumption of negotiations between the Egyptian government and the International Monetary Fund soon.

Freedom and Justice party spokesperson Tarek El-Morsi said Burns’ meeting with the Anti-Coup Coalition was a trial effort to reach a solution to the political crisis and to restore legitimacy, represented in Morsi’s return, the Shura Council and the 2012 constitution.

This is Burns’ second visit to Egypt since the ousting of former president Mohamed Morsi, which follows visits by EU High Representative of Foreign Affairs Catherine Ashton, German Foreign Minister Guido Westervelle and a continuing visit by a high level African Union delegation.