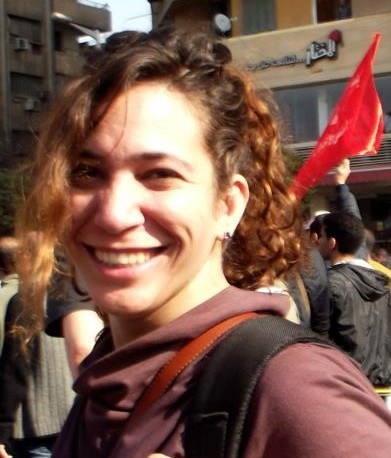 Lyla El-Gueretly, a teacher and activist, was walking on the 6 October Bridge , when Ahmed Yousef, 37, made offensive sexual comments towards her from a bus stalled in traffic. When she insulted him back, he got off the bus and slapped her twice.

Witnesses at the scene said they thought Youssef was her husband, so they did not interfere. El-Gueretly said she wanted justice and for her assailant to learn a lesson.  She shouted “molester!” until a crowd gathered around and started beating him, when she asked them to stop: “My principles are anti-violence.”

“My first challenge was taking him to the police,” said El-Gueretly, who insisted on laying a complaint, “because only that way will he learn his lesson and be made an example of.”

Many obstacles stood in her way. Some suggested that the beating he received by the crowd was enough, but she insisted that violence was not the answer.  On her way to the police station in a microbus, fellow women passengers made comments about her wearing decent clothing and not revealing anything. El-Gueretly felt aggravated by these remarks, which showed how women’s dress was seen as society as a reason or justification for harassment.

A second challenge El-Gueretly had to face was the police. After having her complaint, she went the next day to testify before the Qasr Al-Nil prosecution. According to El-Gueretly, the prosecutor handling the case made comments about how much prettier she looked in person compared to her ID photo, in which she was veiled. “The problem is that the ministry of interior does not know the difference between flirting and harassment,” she said.

The prosecutor remanded the defendant at large, pending the outcome of the case, although he had the authority to keep him in custody for four days. When El-Gueretly went to the chief prosecutor to request that Yousef remain in custody, he told her that he could not imprison every person who assaults someone.

Taha El-Sayed, El-Gueretly’s lawyer, said: “The problem also lies in the law; the penal code is horrific, [assault is only punished by] one month in prison.”  It is very provocative how molestation has become a social trend not condemned by the law, he added.

Yousef was sentenced to two months in prison and fined EGP 200 for striking El-Gueretly, and one month in prison with hard labour for encroachment of a female on a public road. Yousef has been a fugitive since the verdict was announced on 19 June.

El-Gueretly is committed to pursuing him until he is imprisoned, but said she will wait until after 30 June, since she believes the planned protests calling for early presidential elections are also an important cause.

“Rights are pursued with determination, not violence,” she concluded.