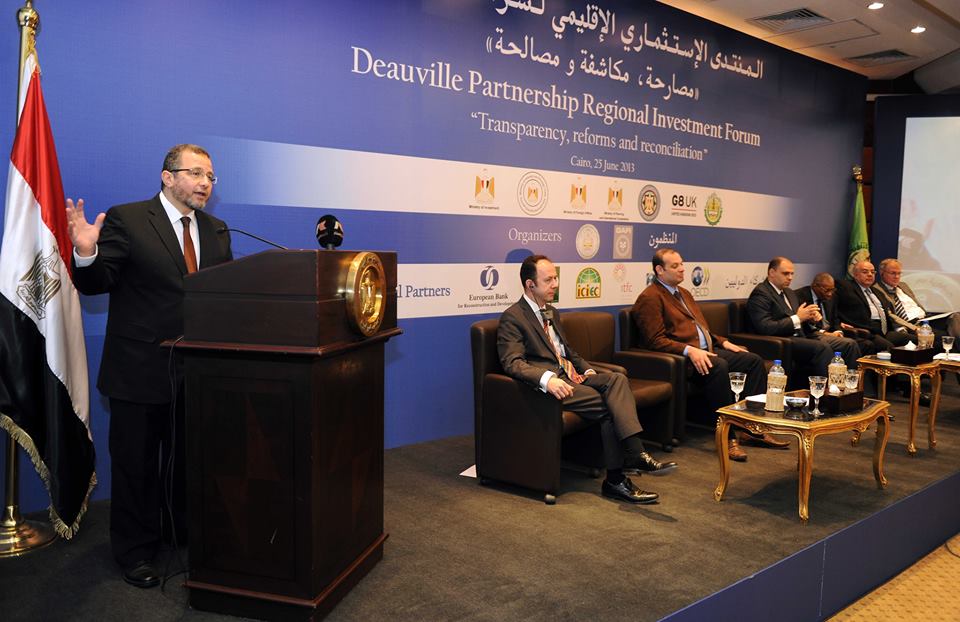 For Egypt to achieve targeted 3% growth during the upcoming fiscal year, security in the country would need to improve, and a political compromise be reached between the country’s feuding factions, according to a statement made by Prime Minister Hesham Qandil on Tuesday.

He stated during the Deauville’s Partnership’s regional investment forum that: “Economic growth cannot be separated from political stability.”

The Deauville Partnership investment forum was hosted by the Islamic Development Bank (IDB), and held for the purpose of seeking out new ways to support Arab governments undergoing political transition throughout the region. The forum, which was attended by a number of representatives from large regional financial institutions, also sought to find ways to improve the region’s investment climate, increase investor confidence and attract businessmen to the Arab world.

Qandil said Egypt was set to attract nearly $100bn worth of investment over the next 10 years as part of the country’s Suez Canal Development project.

Government statistics made public on Tuesday show economic growth during the third quarter of the 2012-2013 fiscal year reached 2.2%, compared to 5.2% during the following period the previous year. Egypt did however achieve 2.3% growth during the first nine months of this fiscal year, during the period set to end 30 June, representing a 1.8% year on year increase.

Qandil added: “In the absence of economic growth, democracy will fail to accomplish its goals, however we do recognise that political tension and polarisation is normal for a country just coming out of a revolution.”

Since the outbreak of the 25 January Revolution Egypt has suffered economic and political unrest, partly as a result of ongoing power struggles. The army, which relinquished power to President Mohamed Morsi nearly a year ago, has stated that it will not stand idly by if tensions reignite.

The country’s opposition has called for mass protests to be held on 30 June, on the one year anniversary of President Morsi’s first day in office. Some have made it their goal to see Morsi step down, while many of the president’s supporters have said they will hold counter protests.

Qandil has stated that despite such circumstances, “there exist today real opportunities for investment within the country.”

He further stated during the Deauville Partnership investment forum that: “We could, if we wanted to, establish a one-stop-shop company to handle the needs of investors operating within Egypt, however in reality this process would take a year and a half, as 17 different government agencies would first need to approve the license to establish such a company. In the meantime, we plan on creating a separate, one-stop-shop station to grant temporary licenses to investors, which they can use until their permanent licenses are approved.”

Investment Minister Yehia Hamed said Egypt is seeking to create between 1-1.5m jobs within the next seven years, adding that the government further hopes to pump EGP 56bn (nearly $8bn) worth of investment into the country during upcoming the 2013-2014 fiscal year.

He further stated during the conference that: “The government’s primary goals today are to create as many new job opportunities as possible and resolve financial disputes faced by investors operating within the country.”

Hamed, who was appointed investment minister just last month, said a total of EGP 116bn worth of investment had entered the country during the first half of the 2012-2013 fiscal year. At 34, Hamed is the youngest minister ever to serve in Egypt’s government. He stated that he hoped to see growth within the country increase to 7% within the next two years, and would work to do so by improving the country’s private investment climate.

In a separate conference held Monday, Hamed said the government would announce within three days the release of the country’s, “first investment map”, in which 120 new development projects would be announced, funded by investments worth upwards of EGP 130bn. All of these projects would be run and operated by the private sector, he said.

He further announced Monday that 14 square kilometres of land located in the Northwest Suez Canal zone would now be open to investment, whose total value could potentially reach upwards of $4.5bn.

Qandil and Hamed’s statements come at a time when tourism and foreign investment are at an unprecedented low.

Qandil further stated that: “Egypt is the cheapest and best place in the world for investors who seek to produce products and export them to the rest of the world.”

He pointed to the fact that rampant unemployment throughout Egypt could provide investors with a large pool of cheap, exploitable labor. Furthermore, he added that if the country was suffering from a fuel crisis, that this should make Egypt’s energy sector especially attractive to investors.

According to official statistics, unemployment in Egypt increased to 12.7% in 2012, with an additional 3.4 million citizens unable to find work, a 7.6% increase compared to 2011.