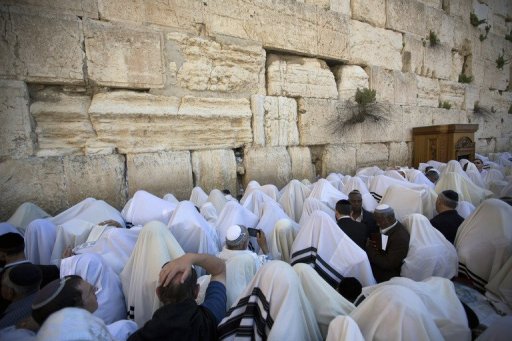 AFP – An Israeli security guard shot dead a Jewish visitor at Jerusalem’s Western Wall, the holiest site where Jews can pray, on Friday, apparently mistaking him for a Palestinian militant.

“There was a Jewish guy, an Israeli guy, who was in the bathroom area,” police spokesman Micky Rosenfeld told AFP.

“He for some reason shouted ‘Allahu Akbar’,” Rosenfeld said. “A security guard drew his weapon and fired several shots at the suspect… He died from his wounds a few moments ago.”

The shooting took place shortly before 8 am (0500 GMT) as the plaza in front of the Wall filled with worshippers for morning prayers ahead of the start of the Jewish Sabbath at sundown.

The site was closed to the public for at least an hour afterwards.

Paramedic Zeevi Hessed told news website NRG that his team rushed to the scene as reports of a shooting came in.

“When we reached the place, we saw him lying at the Western Wall plaza,” he said. “He had been shot in several parts of his body… Sadly there was nothing we could do but declare him dead.”

Rosenfeld said that an investigation had been opened into the shooting.

Public radio quoted the private security guard as telling police investigators that he thought the man, 46, was pulling something from his pocket as he shouted, and was about to attack him.

It said that police found nothing suspicious on the man’s person.

Privately-owned Channel 10 TV said the dead man was believed to be mentally disturbed.

It cited witnesses as saying that the guard fired between seven and 10 bullets and that the fire was unjustified and that the man appeared to be a harmless eccentric.

“We’re looking into the background: why the security officer opened fire and what the motives were of the guy, the 46-year-old — it’s very strange behaviour.”

The Western Wall is venerated by Jews as the last remnant of the wall supporting the Second Temple, which was destroyed by the Romans in 70 AD.

Above it is the compound housing the Dome of the Rock and the Al-Aqsa mosque, the third holiest site in Islam.

Known to Jews as the Temple Mount, the compound is a deeply sensitive location where clashes frequently break out between Palestinian worshippers and Israeli forces.

Jews are not allowed to pray inside the Al-Aqsa mosque compound.