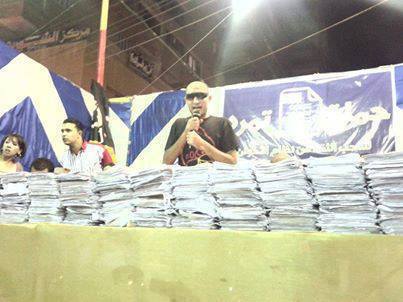 Tamarod campaign announced Tamarod Week of continuous visits to numerous governorates across Egypt to coordinate with all political and social factions their plans for June 30th and their demands for after the fall of President Morsi.

“The leaders and central committee members of the movement will visit as many governorates as possible during the week,” said Mai Wahba, Tamarod spokesperson, to Daily News Egypt.

At the time of the interview Mai Wahba along with Tamarod leading figure Islam Hamam were “on their way to South Sinai for a meeting with leading families and tribes to discuss what will happen on 30 June and what they want after.”

“Different people want different things, some want early presidential elections, other want first to form a presidential council and other first want to focus on writing a new constitution”.

Other members of Tamarod are also travelling throughout Egypt, including visits to Shebin El-Koum in Menufiya, Port Said, Kafr El-Zayat and Upper Egypt to meet with families and try to come up with a “written agreement for what everyone wants for the period after Morsi,” said Wahba.

Wahba said that on 25 June, after Tamarod Week, there will be a press conference announcing the result of the meetings that took place.

Hamam said that there will be “marches to pave the way for 30 June.”

“We still haven’t counted the online petitions and those of Egyptians living abroad, either way we expect that the protests will include much more people than those who signed the petitions,” Hamam said.