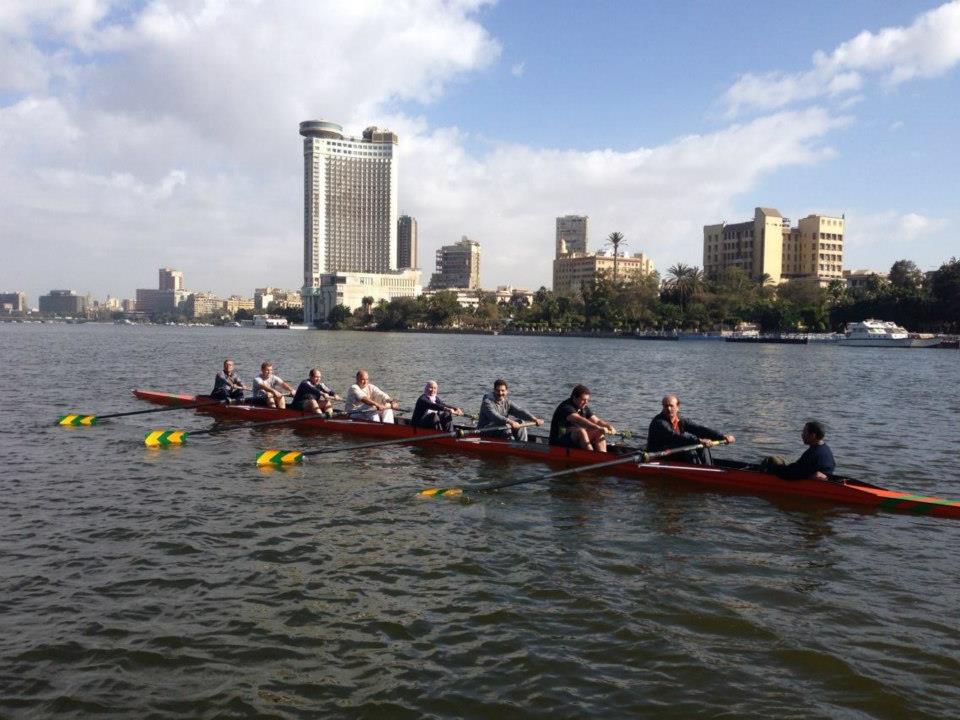 If you are an early riser and happen to be crossing one of Cairo’s central bridges you can often see the rowers training, gliding along the surface of the Nile. There are a number of different rowing clubs along the Corniche and Daily News Egypt went down to the ERC to find out more about the sport

We met up with Hossam and team captain Karim Essam at the ERC in Dokki just a few minutes’ walk south from El-Galaa Bridge. Essam began rowing at the age of 13 and Hossam started at the age of 15. They stressed that in order be competitive in the sport it is important to start young, although that doesn’t mean that you cannot join in if you are little older. Their point was emphasised by a group of 14-16 year olds who were leaving the club having already finished training. The teenagers had been there since 6am to train, as were Hossam and Essam along with other rowers.

“We train six days a week, taking only Fridays off. We normally start at 6am and train until 9 or 10am”, said Hossam. The rowers do not only train on the water, the club has gym equipment which particularly focuses on the areas of the body necessary for building a rower. The gym itself is not exactly state-of-the-art, consisting of aged rowing machines and simple weights, indeed Essam himself described it as a “street work out”.

Essam and Hossam were recently part of a four man scull team that won gold against Al-Moqaweloon Al-Arab, another rowing club that boasts Olympic rowers as part of its membership.

The ERC team competes locally and nationally. In Cairo the teams race on the river Nile against other clubs, while national competitions take place in Alexandria on a lake near the airport. Essam and Hossam want to take part in international races and hold international competitions in Egypt, but in order to achieve this they believe the status of rowing in Egypt must be raised.

“Rowing is only just being discovered in Egypt,” said Essam. Hossam added: “It is not the most important sport in Egypt but it’s very enjoyable.” There are international competitions such as the Arab cup in Tunis and the Rowing World Championships held in England, which Essam’s brother competed in. “We want to bring international teams to Egypt so we can gain experience on an international level,” said Hossam.

The boat house at the club houses a variety of different sized vessels: single-man kayaks, four-man sweep boats, two-man boats, eight-man boats and many more. Many of the boats were old but still used for training, the newer boats (some donated by the American University in Cairo) are used for competitions. Hossam and Essam both expressed their desire to buy new boats from Italian brand Filippi but these cost between EGP 500,000 and EGP 1m.

Governmental support for the sport is minimal, according to the Hossam and Essam. They said Minister of Youth Affairs Osama Yassin promised to promote the sport, but support has yet to materialise.

Despite this, Hossam and Essam continue to spread word of the sport in Egypt and are taking time out to print brochures and distribute them at schools to raise awareness among young people.

Club membership fees at the ERC are EGP 105 per month and if you are good enough to make the team then you no longer need to pay the fees. The club is open to everyone, so if you are interested in taking part go down to the ERC or find them on Facebook.