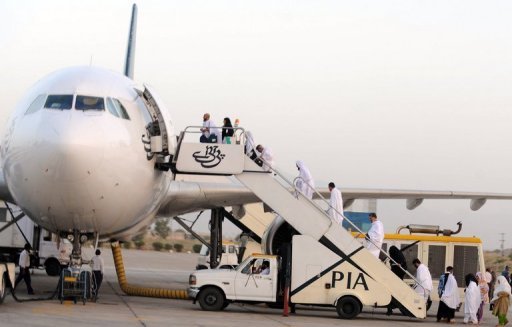 AFP – British police arrested two men on a Pakistan International Airlines plane after British fighter jets were scrambled to escort it to a London airport on Friday, officials said.

Police said the men were detained on suspicion of endangering an aircraft after the plane, which was en route from Lahore in Pakistan to Manchester in northwest England, was diverted to Stansted airport outside London.

“Two men have been arrested on suspicion of endangerment of an aircraft,” police in Essex, where the airport is located, said in a statement.

“They have been removed from the plane.”

Media reports said the incident was not believed to be terrorism-related.

A spokesman for the Ministry of Defence said that Typhoon jets had been launched from a Royal Air Force base after the incident, shortly before the plane was due to land in Manchester at 1300 GMT.

“Typhoon aircraft from RAF Coningsby have been launched to investigate an incident involving an aircraft in UK airspace,” the MoD spokesman said.

After the plane landed, the MoD spokesman said the incident was now a police matter and “our involvement is over”.

Typhoon planes can be scrambled if the pilot or crew of a passenger aircraft sends out a passenger signal, he added.

“The purpose of going up is to investigate what the situation is,” he said.

“Often when a Quick Reaction Alert aircraft is launched the details are not known, but it is known that a signal has been sent.

“Part of the purpose of sending a Typhoon up is to have a look and see what they can see.”