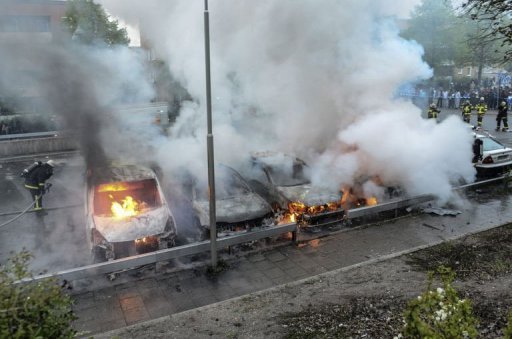 By Sören Billing (AFP) – At least six cars were torched in Stockholm Thursday evening as police called in reinforcements bracing for a fifth night of riots in the Swedish capital’s immigrant-dominated suburbs.

The riots, which have shattered Sweden’s image abroad as a peaceful and egalitarian nation, have sparked a debate in Sweden about the assimilation of immigrants, who make up about 15 percent of the population.

Many of the immigrants who have arrived due to the country’s generous refugee policy struggle to learn the language and find employment despite numerous government programmes.

Police said Thursday they would be calling in reinforcements from other parts of the country as they braced for more trouble in coming days.

In Rinkeby, one of the city’s immigrant-dominated areas, firefighters rushed late Thursday to put out flames that engulfed six cars parked alongside each other. Five cars were totally gutted, and one sustained more moderate damage, according to an AFP photographer on the scene.

Police said between 300 and 500 people were gathered around the blazing cars.

Firefighters meanwhile said a school in another immigrant-heavy suburb, Tensta, was set ablaze but quickly extinguished.

The previous night, the fire brigade had been called to some 90 different blazes, most of them caused by rioters.

In the southern suburb of Skogaas, a restaurant was badly damaged after it was set ablaze.

“We are gradually becoming more like other countries,” said Aje Carlbom, a social anthropologist at Malmoe University.

The troubles are believed to have been triggered by the fatal police shooting of a 69-year-old Husby resident last week after the man wielded a machete in public.

The man then fled to his apartment, where police have said they tried to mediate but ended up shooting him dead in what they claimed was self-defence.

Local activists said the shooting sparked anger among youths who claim to have suffered from police brutality. During the first night of rioting, they said police had called them “tramps, monkeys and negroes.”

Two people, including one police officer, were reported injured in the first four nights of rioting.

Police meanwhile downplayed the scale of the events.

“Every injured person is a tragedy, every torched car is a failure for society… but Stockholm is not burning. Let’s have a level-headed view of the situation,” said Ulf Johansson, deputy police chief for Stockholm county.

“Living as a young person in these segregated areas can be very hard in many ways. You have virtually no contact with other Swedes and a lot of times I don’t think you have a good understanding of Swedish society,” he said.

For example, some 80 percent of the 12,000 residents in Husby are immigrants.

Due to its liberal immigration policy, Sweden has in recent decades become one of Europe’s top destinations for immigrants, both in absolute numbers and relative to its size.

In the past decade it has welcomed hundreds of thousands of immigrants from Iraq, Afghanistan, Syria, Somalia and the Balkans, among others.

This is not the first time the Scandinavian country has seen riots among immigrants.

In 2010, up to 100 youths threw bricks, set fires and attacked the local police station in the immigrant-dominated suburb of Rinkeby for two nights.

And in 2008, hundreds of youths rioted against police in the southern Swedish town of Malmoe, sparked by the closure of an Islamic cultural centre in the suburb of Rosengaard that housed a mosque.

“We know that there is discrimination in these areas, and these events don’t improve the image of these areas, where there is a lot of positive stuff going on but which is totally eclipsed right now,” he told TT.

In Husby, overall unemployment was 8.8 percent in 2012, compared to 3.3 percent in Stockholm as a whole, according to official data.

And a total of 12 percent in Husby received social benefits last year, compared to 3.6 percent in Stockholm as a whole.

The riots have received international media attention, with some comparisons being drawn to similar problems assimilating immigrants in other European countries such as Britain and France.